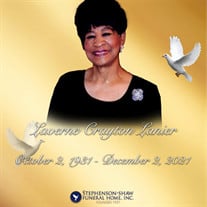 Mrs. Laverne Lanier, a Jackson, Tennessee native, was born on October 2, 1931. She was the daughter of Otto Sr. and Katherine Crayton. She was the second of five children. Her family referred to her as “Sister.” Laverne attended Jackson Public Schools and was with the graduating class of 1950 of the Old Merry High School. Laverne and her family attended the Tabernacle of David the House of Israel, where her father, Otto Crayton, Sr., was one of the ministers. On May 5, 1948, she married the love of her life, Farris Lanier, Sr. He affectionately referred to her as “Hon.” To this union five children were born: Farris Jr., Fayette, Fenoye, Mona Lisa, and Marlon. Farris and Laverne built their relationship around their children taking them to church, sporting events, and dance practices. Years later Farris Lanier, Sr., formed the group the Jacksonians, which became Lanier and Company, where he was the group manager and Laverne was the seamstress, making elaborate outfits worn by the band members. Laverne dedicated her life to caring for her family by being a “teacher,” “doctor,” “provider,” “beauty queen,” and the most giving, caring, selfless person one had the pleasure of knowing. All her grandchildren called her “DaMama.” Laverne taught her children to be respectful, to be the best, and with all your getting, get understanding. Laverne made sure her family lacked for nothing. She knew how to take care of her children in sickness, health, and in need. Laverne was a queen in her on right. She was an impeccable dresser (all outfits were made by her own hand). Her make-up was flawless. Whether she was going out to run errands or sit in her favorite chair to watch television, she was glamorous every day. She loved watching “In the Heat of the Night,” “Blue Bloods,” “Judge Judy,” “The Parkers,” “Wheel of Fortune,” and the “OWN” television network. Her favorite song was “May the Best Man Win,” by Lynn White and J’ Blackfoot. She also loved listening to Lanier and Company and The Jacksonians. Laverne could also sing, and she led many songs in the church choir. Laverne could COOK!!! She had her own recipe book for cooking, but one thing she was known for was her “black skillet” cornbread. It was the best you’ve ever tasted. She was a chef. She prepared homemade meals every day. There was no such thing as leftovers. Every forkful was a delight in your mouth. Her cooking was so good that she was featured in the Jackson Sun for her mouthwatering dishes: Red Velvet Cake and Chicken and Rice Casserole. Laverne was a staple in the Jackson Community. She was employed at Tennessee Frozen Foods and later became the head cook at the Brothers Diner. People knew her as a woman of stature, character, integrity, and moral standards. She was the Superintendent of Sunday School. She was an integral member of the Israel Missionary Singers. Because of her kindness and warm caring spirit, she was chosen as “Woman of the Year 1998” by the Jackson Alumnae Chapter of Delta Sigma Theta Sorority, Inc. Farris and Laverne were married for 35 years until his death in 1983. They were inseparable and enjoyed a wonderful life together. On December 2, 2021, Laverne departed this life to join those who went before her: her loving husband, Farris Sr.; her mother and father, Otto Sr. and Katherine; her sons, Farris Jr. and Fayette; her sisters, Doris and Helen; her brothers, Otto Jr. and John; and a granddaughter, Kari Sade’. Laverne’s infectious spirit will be sorely missed by all those who knew her. Laverne leaves to cherish her memory: two sons, Fenoye and Marlon; a daughter, Mona Lisa, all of Jackson, Tennessee; five grandchildren, De’One Lollar of Nashville, Tennessee, Marshawn Fuller of McLemoresville, Tennessee, Jose Lanier, Tameika Lanier, LaToya Lanier Young ( Kenneth), all of Jackson, Tennessee, and Farris Watson Lanier of Nashville, Tennessee; eighteen great-grandchildren; four great-great-grandchildren; one sister-in-law, Magnolia Crayton of St. Louis, Missouri; and a host of nieces, nephews, cousins, and close friends

Mrs. Laverne Lanier, a Jackson, Tennessee native, was born on October 2, 1931. She was the daughter of Otto Sr. and Katherine Crayton. She was the second of five children. Her family referred to her as &#8220;Sister.&#8221; Laverne attended... View Obituary & Service Information

The family of Mrs. Laverne Crayton Lanier created this Life Tributes page to make it easy to share your memories.

Mrs. Laverne Lanier, a Jackson, Tennessee native, was born on...