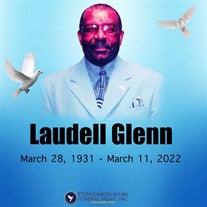 Laudell Glenn, affectionately known as Buddy, was born on March 28, 1931, in Madison County, Tennessee, to the late Willie and Viola Perry Glenn. He was the younger of two siblings born to this union. He often mentioned growing up and being raised by his Uncle Rennie (Lorenzo Perry), who made a great impact on his life, secondary to him losing his mother at the age of six or seven years old. Mr. Buddy was a master upholsterer known for his work covering automobile seats, floor boards, furniture, and church pews in Jackson and the surrounding areas for more than 40 years. He also worked at Baker Brothers Upholstery, Rockwell (present-day Porter Cable), and American Olean Tile. In his early years, he served in the Korean War. A mild-mannered man, he had the heart of a true giver. He was a believer in Jesus Christ, who believed in standing on the principles of God’s Word, no matter what. He was a servant who honored God and served faithfully at Bread of Life Church until his health failed. Those preceding him in death include his son, Larry Windell Glenn; daughter, Jacqueline Marie Cobbins; and sister, Ernestine Glenn Clay. He leaves to cherish his memory, his wife, Dorothy Glenn; sister: his sons, Gregory Glenn of Broadview, Illinois, and Gerald Vann (Cynthia) of Jackson, Tennessee; daughters, Barbara Berry and Beverly Reynolds, both of Jackson, Tennessee; sister: Lula Mae Dinwiddlie; grandchildren, Antonyo Glenn (Sonja) and Leslee Massengill, both of Murfreesboro, Tennessee, Michael Reynolds, and Joy Crenshaw (Donzel), both of Memphis, Tennessee, Tenille Perry (Terry), and A. J. Berry, both of Jackson, Tennessee, Brandon Sampson of Maywood, Illinois, Larrissa Robinson of Aurora, Illinois, and Jeremy Vann; stepchildren, Mary Ivie of Jackson, Tennessee, Brenda Price of Memphis, Tennessee, Billy Ingram of Bolivar, Tennessee, and Debbie Hill, and Dorothy Cox, both of Cincinnati, Ohio; a life-long friend, Mr. Walter Bond; two cousins, Jessie Chatman and Lee Moore; and numerous nieces, nephews, and other cousins and friends.

Laudell Glenn, affectionately known as Buddy, was born on March 28, 1931, in Madison County, Tennessee, to the late Willie and Viola Perry Glenn. He was the younger of two siblings born to this union. He often mentioned growing up and being... View Obituary & Service Information

The family of Mr. Laudell Glenn created this Life Tributes page to make it easy to share your memories.

Laudell Glenn, affectionately known as Buddy, was born on March...

Send flowers to the Glenn family.