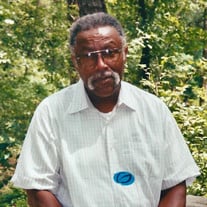 Mr. Larry Dewayne Williams, Sr., was born April 6, 1949 in Lexington, Tennessee to the late James Williams and Ruth Ferguson Williams. He is the grandson of the late Ivey and Katie Mae Williams and the late Mr. and Mrs. W.L. Ferguson. On December 18, 2017, Larry gave up the ghost and transitioned from this realm peacefully at his home to be with the lord. Larry Graduated in the last class of Montgomery High School in 1967. He attended Jackson State Community College and felt the desire to serve his country. Larry enlisted in the United States Air Force and was stationed in Korea. He served both active duty for 2 tours and reserves for 8 years before being honorably discharged from both. Larry was married on July 1, 1973 to his childhood sweetheart, Linda Ellis and to this union two sons were born, Larry, Jr. and Christopher. Larry was employed with the Tennessee Valley Authority for 36 years and retired due to his health beginning to fail. He was a volunteer with the Shelby County Sheriff Department as a Reserved Deputy Sheriff. Larry was actively involved in the community serving with the Boy Scouts of America as Scout Master Troop 506/444, last serving as Assistant Scout Master to Troop 345, Assistant Cub Master, former member of the district and council training team, recipient of Wood Badge and Silver Badge honors in addition to other numerous district and council awards. He was also a former member of St. John and Chelsea Lodge #84 and Chelsea OES #84 Patron and was an active member of the King Riders Motorcycle Club. In his later years of life, Larry rededicated his life to Christ and joined Middle Baptist Church in Memphis, TN and attended regularly until his health began to increasingly fail. He leaves his friend and wife of 44 years, Linda F.E. Williams; sons, Larry (Tamika) Williams, Jr., of Nashville, TN and Christopher Williams of Memphis, TN; mother-in-law, Mozella Buck; two grandchildren, Kristen and Londyn Williams; one brother, Ronald Williams; sister-in-law, Pamela (Donald) Barnes; a special bond with niece, Jayla Barnes; niece and nephews, Marquita and Michael Williams; a close friend, Ed Aldridge, and a host of other relatives and friends.

Mr. Larry Dewayne Williams, Sr., was born April 6, 1949 in Lexington, Tennessee to the late James Williams and Ruth Ferguson Williams. He is the grandson of the late Ivey and Katie Mae Williams and the late Mr. and Mrs. W.L. Ferguson. On December... View Obituary & Service Information

The family of Mr. Larry D. Williams Sr. created this Life Tributes page to make it easy to share your memories.