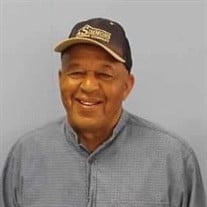 Of all the beautiful things in life, the most beautiful is character, and he who possesses a beautiful character is worthy of notice. He whom we memorialize here today possessed such a character. One of the highest tributes that can be paid to any man is that he was loved by his fellow man. Truly, this is the sentiment of all who knew Keith. This gallant and noble gentleman who was always giving and patient as a father, husband brother, uncle, relative and friend to all mankind. Keith was one of 14 children born in Jacks Creek, Tennessee to the union of Culley and Irene McHaney Ross. Keith accepted Christ at an early age and was baptized at Beech Spring Baptist Church, where he remained a lifelong, faithful serving member. He was educated in the Chester County School system. Keith enlisted in the United States Army in the year of 1951, serving valiantly during the Korean War when he was injured, disabled, and honorably discharged as a result. Being raised by his loving parents to a respectable work ethic, and possessing a great deal of self-determination, he did not let those tremendous setbacks deter him from pursuing work and creating opportunities to serve his community and church whenever and wherever he could. His determination, perseverance, and work ethic set a high bar for his family and others. Keith married Netha Glin Trice Long on October 31, 1960 and remained so until his passing. Without a doubt Keith’s (Paw Paw to his grandchildren) greatest joy and pleasure in life came from his family. As a devoted husband and father, he always put the interests of his family first -- even above his own -- and ensured that his wife and children were given the best that he could provide. His ever-loving presence, kind deeds, and fun-loving nature that was known to all will always abide in our hearts and encourage us to continue the legacy that he has left us. Keith was preceded in death by his parents, Culley and Irene McHaney Ross; his brothers, Marcella Ross, Bob David Ross, and Joe Willard Ross; his sisters, Faye Pearson, Shellie Barham, Boytha McCain; and his sons, Charles Dewayne Ross and Lynn McCarthy Ross. Those left to cherish his memory are: his wife of 61 years, Netha Glin Ross of Henderson, TN; a son Phenix Narsheno (Sherry) Ross of Henderson, TN; three daughters, Vernell (Richard) Thomas of Pinson, TN, Pamela G. Ross of Jackson, TN, and Felenceo Marshea (Mario) Hill of Mt. Juliet, TN; four sisters Ilene Amos of Jackson, MI, Zenobia “Polly” Maples of Beaumont, TX, and Alfredia Ingram of Jacks Creek, TN, and Denny Bonds of Henderson, TN; devoted sister in-law Lovie Ross; a devoted grandson and caregiver, Nicholas “Nic” Ross; grandchildren, Debbie, Kevin Thomas, Keith Montez, Aaron (affectionately known as “Arab” to his Paw Paw), Kenshae, Mario Jr., Dalvin, Olita, Celinda, Marissa, Lynn Jr., Kevin (Tabitha) Williamson, Shereno (Jon), Kaylan; great grandchildren, Tevin, Sharnell, Jeremiah, Olivia, Skylar Grace, Jayce and Liberty (great-great); extended family, Jason, Shaun, Meesha, Necos, and Whitney Wilson; and a host of nieces, nephews, other relatives, and friends.

Of all the beautiful things in life, the most beautiful is character, and he who possesses a beautiful character is worthy of notice. He whom we memorialize here today possessed such a character. One of the highest tributes that can be paid... View Obituary & Service Information

The family of Mr. Keith D. Ross created this Life Tributes page to make it easy to share your memories.

Of all the beautiful things in life, the most beautiful is character,...

Send flowers to the Ross family.