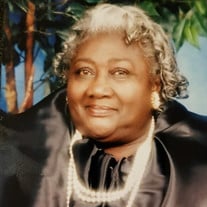 Mrs. Joyce Ann (Phillips) Kenton departed this life at 2:03 PM on Friday, December 22, 2017 after being born the 2nd child of 6 to the union of the late Thomas and Fantine (Cole) Phillips, on August 17, 1941. She was 76. Mrs. Kenton was reared in Crockett County in a rural area called the Cherryville Road Community. She attended the public schools of Crockett County, earning her high school diploma, and later earning a Degree from West Tennessee Business College. She enjoyed many God-given talents, one of which was writing – which she utilized to author a weekly column for an area local newspaper in her early adult life. Her most prized talent was her ability to nurture and mold young minds, her children as well as numerous others who were fortunate enough to be placed in her care. She was known as the “Mother Bear” to all of her “Cubs”. Her love for the Lord began early as she was taught of our Lord and Savior by devout Christian parents. She joined with her home church, Jerusalem Missionary Baptist Church and remained a faithful member until her health failed. Her last Sunday on this earth found her in attendance at “Morning Worship”, at her beloved Jerusalem, after a long absence due to illness. It was in this church that her love for God manifested itself through the gifts of being a choir member, serving on the Kitchen Committee, and any other task she was asked to do. She united in Holy Matrimony with James Kenton, Jr., and to this union 5 children were added to the family of James and Joyce, Delois Phillips Howard, of Atlanta, GA; James Curtis (Odell) Kenton of Memphis, TN; Dennis (Elaine) Kenton, of Jackson, TN; Thomas (Mignon) Kenton, of Chattanooga, TN; and Frances Kenton, of Nashville, TN. In addition to her 5 loving children, she leaves to celebrate her home going; 1 brother, Sonny (Farris) Phillips of Jackson, TN; 3 sisters, Monola Phillips Patterson and Helen (Bobby) Hart, of Jackson, TN; and Carolyn Phillips(Rick Helms) of North Garden, VA; 11 grandchildren; 1 great-grandson, and a host of cousins, family and friends

The family of Ms. Joyce A. Kenton created this Life Tributes page to make it easy to share your memories.

Send flowers to the Kenton family.