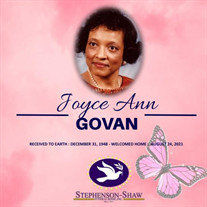 Mrs. Joyce Govan, the daughter of the late Johnnie B. & Lottie B. Brooks Anderson, was born December 31, 1948 in Jackson, TN. She departed this earthly life on Tuesday, August 24, 2021 at the age of 72. She graduated from East High School... View Obituary & Service Information

The family of Mrs. Joyce Ann Govan created this Life Tributes page to make it easy to share your memories.

Mrs. Joyce Govan, the daughter of the late Johnnie B. &amp; Lottie...

Send flowers to the Govan family.