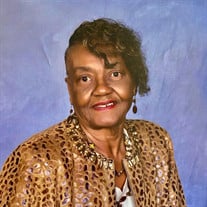 Mrs. Josephine Hodges Mackey was born on March 29, 1947, in Jackson, Tn, to the late Pettis and Sadie Mae Ross Hodges. She died on Saturday, August 8, 2020. Josie accepted Christ as her Savior early in life and became a member of Walnut Grove Baptist Church in Jackson. She formally served in the Usher ministry and remained a faithful member of the Hospitality Team, the Mother’s Ministry, Women’s Sunday School and the Mass Choir until her passing. The memories of her rendition of Jesus is on the Mainline and Showers of Blessings will forever remain in our hearts at Walnut Grove. She graduated from East High School where she treasured being a member of the Girls Basketball Team. In her adult life she worked in the manufacturing industry for years, until she began her journey in the field that most fit her passion and skill, serving others in the home health care industry. She showered her patients with love and care, living out the scripture, “whatever you do, do it as unto the Lord”. Even after retiring from the workforce, she could always be found serving and waiting on others. She loved cooking for her family, friends and her church family, continually exhibiting a spirit of hospitality. Many will miss her delicious meals cooked the way only she could cook them. Josephine was preceded in death by her husband, Louis Mackey, her parents, two brothers, J. C. Hodges and Eddie C. Hodges, and two sisters, Minnie Peoples and Patsy Dockery. Josephine (“Do” as she was affectionately called by her family) was dedicated and loyal to her family. She was loved dearly and will be greatly missed. She leaves to cherish her memory: her loving children; son, Gregory Hodges (Annissa) of Selmer,Tn., and daughter, LaVerne Franklin (Travis) of Jackson, Tn., a cousin she reared as her own, Sophia Ross Watkins (James) of Jackson, one brother, James Roger Bailey (Jeannie) of Columbus, Mississippi, a cousin reared as a brother, L.C. Ross. Three grandsons whom she loved dearly, Travis Franklin, Jr. of Atlanta GA., Aston Hodges of Nashville, Tn., and Steffon Hodges of Jackson. A great-grand-daughter, Khloe Hodges. She had a special bond with nieces and nephews that she helped to rear: Angela Brown, James Hodges, Anthony Hodges, Kenneth Hodges, Lisa Peoples, Latonia Antwine, Chris Dockery, Marcus Peoples and Lakeya Peoples; two God-daughters, Schvonnta Hoyle and Kawana Cobb; a special friend, John Woods; a host of other nieces, nephews, cousins and friends.

Mrs. Josephine Hodges Mackey was born on March 29, 1947, in Jackson, Tn, to the late Pettis and Sadie Mae Ross Hodges. She died on Saturday, August 8, 2020. Josie accepted Christ as her Savior early in life and became a member of Walnut Grove... View Obituary & Service Information

The family of Mrs. Josephine Hodges Mackey created this Life Tributes page to make it easy to share your memories.

Send flowers to the Mackey family.