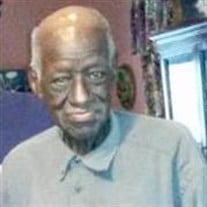 Mr. Joseph Coleman was born June 24, 1931 in Barton, Mississippi to the late Arthur Coleman and the late Freddie Coleman. After a brief battle with throat cancer, he departed this earthly life on September 27, 2016. Mr. Coleman professed his... View Obituary & Service Information

The family of Mr. Joseph Coleman created this Life Tributes page to make it easy to share your memories.

Send flowers to the Coleman family.