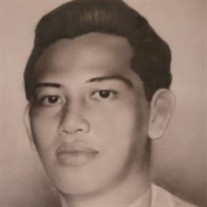 Jose Dizon, also known as Pepe, was born in Pasay City, Philippines. He graduated from Pasay City East High School. Upon graduation from high school, he went to La Salle University in Manila, Philippines. His late parents and grandson are Angel Dizon and Flauiara Guiterrez Dizon and Michael Joe Pana. He is survived by his wife Remedios Dizon of Jackson, TN and his children Angel Dizon and Ella Tellez of Jackson, TN, Belinda Dizon and Danilo Dizon of the Philippines and Emelita (Ricky) Brown of Racine, WI and his grandchildren Ashley (Thomas) White of Bells, TN, and Elizabeth and Marco Tellez of Jackson, TN, and Kathrina, Katriz, Christina, Christian, Mark, Aryana, Marie, Kenneth and J.C. all of the Philippines, his sister Norma Dorsey of Alabama, Manuel and Kirino Dizon of the Philippines. He will leave to cherish his memory a host of nieces, nephews, cousins, aunts and uncles.

The family of Mr. Jose Dizon created this Life Tributes page to make it easy to share your memories.

Send flowers to the Dizon family.