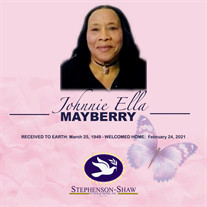 On March 25, 1949 the late Shellie and Lucille Smith welcomed their beloved daughter Johnnie Ella Mayberry into the family. She departed from her earthly home to be with the lord after her peaceful transition on Wednesday, February 24, 2021. She was led to Christ at an early age and attended Moore’s Chapel C.M.E. Church until she left her parents’ home. Afterwards she joined in matrimony to George Clarance Mayberry Sr. to whom she remained married for over 20 years. Four children were born from the unity of this marriage. She worked at AT&T and D&L for many years. She had dreams of becoming a nurse. She loved Zion Church where she remained a member and attended whenever possible. She loved spending time with her children, grandchildren, and great grandchildren. She was a caregiver to many including her own mother the late Lucille Smith. She loved listening to gospel music, counseling others, reading the bible, and hosting family gatherings. She was preceded in death by her daughter: Paula Elaine Mayberry; her siblings: Robert, William, Arnold, David Smith, Shirley Taylor, Jenne Woolfork, Jessie Coleman, Eva Mae Stewart, and Dorothy Sue Peoples. She leaves to cherish in her loving memories her children: George Mayberry Jr. of Orlando, FL, Claretta (Cory) Williams of Jackson, TN, Jeanetta Smythe of Milan, TN, fifteen grandchildren; Jeanetta Sanders, Dr. Joshua Mayberry, Zachery Mayberry, Marcus Mayberry, Marissa Brown, Brooklyn Mayberry, Caitlyn Mayberry, Danielle Mayberry, Lexie Mayberry, Jerome Donald, Camri (Tevin) Crayton, Destiny Donald, Rodney Napper, and of which she raised as her own Shericka Cunningham and Conjetta Cunningham. In addition, she has a host of great-grandchildren; siblings Rev. Percy (Estella) Smith and Vinnie Jackson and a host of nieces, nephews, cousins, other relatives, friends and an irreplaceable friendship with Ryan Scott.

On March 25, 1949 the late Shellie and Lucille Smith welcomed their beloved daughter Johnnie Ella Mayberry into the family. She departed from her earthly home to be with the lord after her peaceful transition on Wednesday, February 24, 2021.... View Obituary & Service Information

The family of Ms. Johnnie Ella Mayberry created this Life Tributes page to make it easy to share your memories.

Send flowers to the Mayberry family.