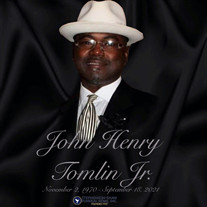 John Henry Tomlin, Jr. was born on November 2, 1970 in Jackson, Tennessee to the late John Henry Tomlin, Sr. and May Lois Perkins Doby. He was the youngest of three children. He departed this earth on September 18, 2021. He accepted Christ... View Obituary & Service Information

The family of Mr. John Henry Tomlin Jr. created this Life Tributes page to make it easy to share your memories.

Send flowers to the Tomlin family.