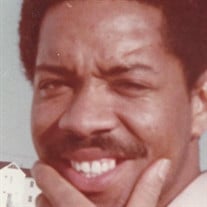 Mr. John William Moore, Sr., was born on October 11, 1951 to Mrs. Zella Perry Moore and the late Mr. Earnest Griffin Moore, Jr. in Jackson Tennessee, in the Adair Community. He was the fourth of their children. John William, as he was called by family and friends around Jackson, was one of the hardest workers growing up and his work ethics were important to him. He realized at an early age that the harder you worked, the more money you made. He took that philosophy with him and tried to instill it in his children and nieces and nephews. John accepted Christ as his personal Savior and was baptized at a young age at the St. John MBC No 1. The revivals at church were always his favorite especially when Rev. Herman Yarborough from Detroit, MI would be the speaker. There was always a lot of food and John loved to eat even as a young boy. John received his education in the Madison County School system where he attended St John Elementary and graduated from East High School in 1969. He loved learning and was active in the Agriculture department with Mr. Cleophis Rutherford as his teacher. John moved to Cleveland, OH after graduation where he resided until his death on Sunday, December 17, 2017. His employment in Ohio included the Ford Motor Company, Wabash Alloy, Bargar Metals and The IX Center. John also served a brief time with the National Guard Reserve and received an Honorable Discharge. John later decided that he wanted to be his own boss. For the past ten years, he did just that. From sun up to sun down, he painted houses, mowed yards, moved furniture and scrapped. Lastly, cooking barbecue was only second to his "Steelers". On weekends you could find him at his place or at his brother Ronnie's house on the barbecue grill and listening to the Blues. Denise LaSalle was one of his favorite. John married Annette Overton in his early years and to this union bore two sons: John W. Moore, Jr. and Thomas Lee James Lewis Moore (deceased). Later in life, John welcomed his third son, Demetrius Ballentine (Michelle) of Akron OH, and a stepdaughter, Mookie, their mother, Bonnie (deceased) John later married Arlene Green and to this union, three daughters were born: Shequilla, Sherita and Amber all of Ft. Wayne, IN. John and Linda Simon have one daughter, Alexis Marie Simon-Moore and his Stepson Nick who always thought of John as his Dad. John had a younger brother Timothy Moore (Cynthia) preceded him in death. John leaves to cherish his memory, his wife Arlene Green Moore, his mother, Mrs. Zella Moore, Jackson TN., six children, 26 grand-children, 10 great grandchildren, 10 siblings: James Hunt(Darlene), Billy and Ronnie (Tuwanna) all of Cleveland OH, Arthur, Jessie(Evans), Helen Bond (Bennie), Ernest, Hurlon and Charlette Price all of Jackson TN, Pam Newman (Les) of Nashville, TN; three aunts: Mrs. Roxie Barnett, Mrs. Nancy Faye Roberts of Jackson TN and Mrs. Joyce Payne of Chicago IL. three uncles: Larry Moore (Sheila) of Pacoima CA, Gilford Yarborough (Murphytine) and Henry F. Yarbrough all of Jackson; and a host of nieces, nephews, cousins and other relatives, friends and neighbors. John had a special bond with this buddies a.k.a “The Tree-Men”. He felt better if he could get to that tree and fellowship with his “brothers from different mothers”.

Mr. John William Moore, Sr., was born on October 11, 1951 to Mrs. Zella Perry Moore and the late Mr. Earnest Griffin Moore, Jr. in Jackson Tennessee, in the Adair Community. He was the fourth of their children. John William, as he was called... View Obituary & Service Information

The family of Mr. John W. Moore created this Life Tributes page to make it easy to share your memories.

Send flowers to the Moore family.