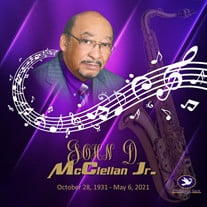 John David McClellan, Jr was the only child of the late John David and Helen Virginia McClellan, born October 28, 1931 in Jackson, TN. He was the husband of Louvella (for 52 Years). The Father of five children, Grandfather of five, Great Grandfather of three. John made his commitment to Christ at an early age right here at Macedonia Missionary Baptist Church and remained a member for 77 years under the leadership of Rev. Jackson, Rev. Taylor, Rev. Derrick, Rev. Page, Rev. Brock, Rev. Mackey and currently Rev. Reginald Currie. John attended A&I State University where he was in the Band and ROTC. While in college he was a member of the Curtis Ames Orchestra in Jackson, TN. In 1953 at the end of his Sophomore year, he was drafted into the United Sates Army and for two years he served as a Special Troops Bandsman TIC at Fort Benning, GA. He received the National Defense Service Medal and The Good Conduct Medal.. Upon his discharge from active military service, he transferred to the Army Reserve to complete an additional eight years. Upon his return, he continued his education, earning a BA Degree in Music from Lane College. In April 2010 Lane College honored hìm with a 60-year college diploma. John received his early education in the Jackson City Public School System. He expressed a passion for music when he was about 12 years of age. As a result of the desire, determination and most of all by the Grace of God, he pursued a career in music. John served his entire career as Band Director in the Jackson City School System for 33 years and retired in 1990. John performed with many local bands throughout the city for over 50 years. In 2008, Merry High School Alumni Association recognized him for his dedication, enthusiasm, and commitment to Merry High School. He was committed to developing not only showmanship but musical precision and technique in his students. John has been was blessed to have the opportunity to touch the lives of many students during his career. John David McClellan, Jr. was a quiet, kind, caring person who loved God, his Family, his Friends (and of course his Music). His home was always filled with music. Whether he was playing, listening, or simply whistling while performing a task. John's basic belief was to treat others as you want to be treated. That was the code he lived by. His ultimate trust was in his Lord and Savior, Jesus Christ. John was Loved and Respected by his entire Family and those who knew him. He will forever be the missing note from the music of our lives. He leaves to cherish his memories and continue his legacy of love, and faith, his wife Louvella, his five children---Cynthia Henry (Charles), Sandra McClellan, Felecia Love (Terry),. Joseph Manuel (Jessica) and Lawanda Baker; five grandchildren: Hamish Love, Timothy Love (Anne), Melissa Love, Nigel Manuel and Laila Baker; three great-grandchildren, Jadyn Love, Jaxon Love, and Malia Nelson.

John David McClellan, Jr was the only child of the late John David and Helen Virginia McClellan, born October 28, 1931 in Jackson, TN. He was the husband of Louvella (for 52 Years). The Father of five children, Grandfather of five, Great Grandfather... View Obituary & Service Information

The family of Mr. John D. McClellan Jr. created this Life Tributes page to make it easy to share your memories.

John David McClellan, Jr was the only child of the late John...

Send flowers to the McClellan family.