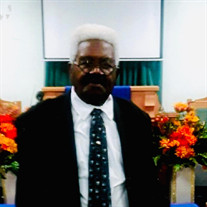 Joe Edward Merriweather, the second of seven children born August 31, 1929, in Madison County, Tennessee the son of the late Odie Lee Murray and the late J.B. Merriweather. He transitioned from this life at 5:30 a.m., on Monday, February 10, 2020, after a brief illness at the age of 90. Mr. Merriweather was reared in Madison County and attended school there. He professed a hope in Christ at an early age and joined Bethlehem #1 Baptist Church where he was a member until his family moved to the Cerro Gordo Community in 1941. He united with the Cerro Gordo Baptist Church where he was a faithful member of the Usher Board, Male Chorus, Church Choir and Deacon Board. In February 1951, he enlisted in the United States Army and served in South Korea during the Korean War and a brief tour in Tokyo, Japan due to a broken wrist. He returned to United States on January 17, 1953. He was united in Holy Matrimony to Clara Etta Fuller on March 1, 1953 in Blue Mountain, Mississippi and to this union three children were born. Mr. Merriweather was preceded in death by two brothers, Lee Henry Merriweather and James Arthur Merriweather and his one and only grandson, Jerry Dewayne Franklin, Jr. He leaves to cherish his memories: his wife of 67 years, Clara Etta Merriweather, children, Beverly (Herby) Martin of Jackson, TN, Eddie (Shirlaine) Merriweather of Memphis, TN, Crystal Merriweather of Jackson, TN, one special grand God daughter, Madison Cole of Jackson, TN, four sisters, Helen Hopgood of Chicago, IL, Betty Walker of Gary, IN, Catherine Johnson, Eunice (Tom) Black both of Memphis, TN, one brother, Clarence (Ethel) Merriweather of Jackson, TN, two half sisters, Shirley Cole of Jackson, TN, Artis Sheldon of Elgin, IL, three sisters-in-law, Ivory Merriweather of Jackson, TN, Cathy Fuller of Nashville, TN, Laura Fuller of Flint, MI, two brothers-in-law, G.W. Fuller of Flint, MI, Millard Fuller of Detroit, MI and a host of nieces, nephews, great nieces, great nephews, great great nieces, other relatives and friends to forever cherish his memories

Joe Edward Merriweather, the second of seven children born August 31, 1929, in Madison County, Tennessee the son of the late Odie Lee Murray and the late J.B. Merriweather. He transitioned from this life at 5:30 a.m., on Monday, February... View Obituary & Service Information

The family of Mr. Joe Edward Merriweather created this Life Tributes page to make it easy to share your memories.

Send flowers to the Merriweather family.