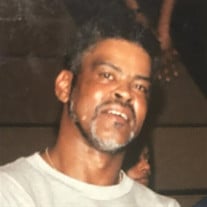 Joe Johnson, Jr., fondly known as “Phil Mo,” was born on July 3, 1955 in Jackson, TN to the late Joe Johnson, Sr. and Alice Johnson Minor. He was educated at Lincoln Elementary, Merry Junior High, and graduated from Jackson Central Merry High School. While in high school, he was very active in sports, particularly basketball, which was his passion. After high school he briefly attended Tuskegee Institute (currently known as Tuskegee University). He received a degree from Oak Ridge Training and Technology Center in Oak Ridge, TN in 1981. He continued to be very active in the community coaching youth basketball teams throughout the city. Whether it was coaching at the Boys and Girls Club or city / county leagues, Joe was always excited about playing and teaching the game. He was known for his smooth jumper in the nearby parks and is considered to be a playground legend in Jackson. He was employed by multiple companies over the years including Procter & Gamble and Random House. Joe was respected by all that knew him for his kind heart and great personality. He was very quick witted and had a sense of humor that could keep everyone smiling. Along with his kind heart and personality, he was able to spark a positive connection with everyone he encountered. He was a die-hard Pittsburgh Steelers and Los Angeles Lakers fan. He was preceded in death by his parents Joe Johnson, Sr. and Alice Johnson Minor. He leaves to cherish his memories: a very special longtime companion Kristine Hodges; his devoted children: Marcus Johnson of Richmond, VA, Johnathan (Jessica) Johnson of Acworth, GA, and Joe Johnson III of Brookhaven, GA; five grandchildren: Kristen Brown, Madison Johnson, Maya Johnson, Cameron Johnson, and Kendall Johnson; one great grandchild: Kisame King; four sisters: Evelyn Whisnant, Delois Whisnant, Alma Delk, and Diamond (Samuel) Sprewer; an aunt: Flossie Mae Brooks; a special cousin Suprena (Melvin) Allen, and a host of nieces, nephews, cousins, and friends.

The family of Mr. Joe "Phil Mo" Johnson Jr. created this Life Tributes page to make it easy to share your memories.