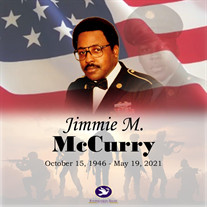 SFC Jimmie Mitchell McCurry October 15, 1946, to Cleveland and Flossie McCurry. At an early age, Jimmie accepted Christ and became a member of Lane Chapel CME Church. Jimmie was a 1964 graduate of Stigall High School. While in high school, he was a member of the band and was a football player. Upon graduating from high school, Jimmie enlisted in the United States Army in July 1964. He served until May 1973. He became a member of the Humboldt Police Department. In December 1974, Jimmie re-enlisted in the Army. He continued his service until he was honorably discharged in October 1988. During his time in the Army, he served as a Fire Support Specialist and an Indirect Fire Infantryman. He did three tours to Vietnam, as well as tours in Korea and Germany. He received many awards and accolades during his time in the service. Most notable are the Bronze Star, Purple Heart, and Good Conduct (7th Award). Jimmie was preceded in death by his parents, two brothers, two sisters, a niece, a great-niece, and two stepdaughters. He leaves to cherish his memory: his sisters, Maxine Gentry, Cynthia Jones, and Sheryl McCurry, all of Humboldt, TN, and Minnie Lee Boyd of Jackson, TN; a brother, Rickey (Sandra) McCurry of Las Vegas, NV; stepson, Cleavon Dance of Arizona; special great-nephews, Derrick T. Seymour of Arlington, TN, and Devin T. Seymour of Milan, TN; his heartbeats and online shopping companions, great-great- nephew, Brayden D. Seymour of Olive Branch, MS, and great-great-niece, Alahni G. Seymour of Arlington, TN; and a host of nieces, nephews, other relatives and friends.

The family of Mr. Jimmie M. McCurry created this Life Tributes page to make it easy to share your memories.

Send flowers to the McCurry family.