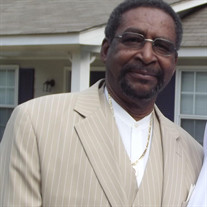 Jim Henry Muhammad (born Jim Henry Brassell) was born on December 9,1941 in Batesville, Mississippi to his parents Fletcher and Ollie. Coming from a large family, Jim was inevitably a hardworking young man with strong values. He worked in field labor throughout his adolescence until he graduated from South Panola High School. After graduation he was drafted into the United States Army, where he served for over 21 years and later retired. While in the military Jim married his sweetheart Audrey and moved to Portland, Oregon. In the late eighties Jim was introduced to the Nation of Islam and became a follower of The Honorable Elijah Muhammad. In 1996 he changed his last name to Muhammad. In 2007 he returned to his home state of Mississippi with his wife and youngest daughter to live out his retirement. Jim was a bonafide country boy and a lover of the earth. He loved fishing, hunting, gardening, and building things, a true Jack of all trades. Above all he enjoyed spending time with his family. For Jim, Allah (God) was the head of his life; a life that was richly full and abundantly blessed. Jim was a wealth of knowledge and wisdom; and had a memory as he would say, “like an elephant with a bad peanut.” He was a no-nonsense brother who had a low tolerance for foolishness, yet he had a high-level of compassion for others. He was caring and always wanted the best for all those he encountered. Jim was an unequivocally good man. Jim was preceded in death by both his parents as well as his siblings: Marie, RB, Louise, CT, Georgia Mae, and Cisero. He leaves behind his loving wife of 40+ years Audrey Muhammad (Dotsey), four children (and their respective spouses): Viva Williams (Jerry Williams), Steviette Stokes, Diontae Brassell, and Aminah Gooch (Lorenzo Gooch); his grandchildren, Derrick, Cameron, Amin, Jabari, and Nuri; his siblings Martha Slate, Emma Carothers, Lydia Kennedy, Lonnie Dotsey Jr., and Lawrence Dotsey; as well as a host of nieces and nephews.

Jim Henry Muhammad (born Jim Henry Brassell) was born on December 9,1941 in Batesville, Mississippi to his parents Fletcher and Ollie. Coming from a large family, Jim was inevitably a hardworking young man with strong values. He worked in... View Obituary & Service Information

The family of Mr. Jim Henry Muhammad created this Life Tributes page to make it easy to share your memories.

Send flowers to the Muhammad family.