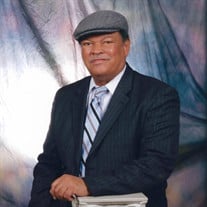 A loving husband, father and grandfather, James Jasper Vaughn Jr., age 74, peacefully transitioned to his heavenly home on April 20, 2016 with his wife and family by his side. Born November 23, 1941 in Maury City, Tennessee, James was the only child born to James Jasper Vaughn, Sr. and Mary Ellen (Dupree) Vaughn. Descending from a family of educators, James completed his elementary and high school years in the public schools of Crockett County. He received his Bachelor of Science in Education from Lane College in Jackson, Tennessee and began his long teaching career throughout Crockett, Haywood and Madison Counties. It was during his time at Lane College that he met the love of his life, Thomasina Brawner of Atlanta, Georgia. James and Thomasina were married December 29, 1964. From this union three children were born, Tosca, James, III and Carvin. Until his health declined, James was a faithful member of St. Paul C.M.E. Church where he served as a Steward, basketball coach for the youth and overseer of the church bus ministry. As a member of Alpha Phi Alpha Fraternity, Inc. he assisted with numerous community service projects. In April of 2015, James was recognized by Lane College as a 50 year graduate and received his honorary diploma. He was a founding member of the Society for African American Cultural Awareness (SAACA) and also served as treasurer of the Jackson, Tennessee chapter of the NAACP until his health failed. Affectionately known as “Beaver” by his family and “PaPa” by his grandchildren, James was adventurous and enjoyed farming, fishing, gardening, traveling and sports. He was very fond of animals, particularly his protective little dog, JC. As a person, James was a strong, patient, self-sufficient man who always looked for ways to help others. As a loving father, James was kind, gentle and warm to all who met him. He cherished spending time with his devoted cousins and sharing amusing stories about life. James especially loved Thomasina, his devoted wife of 51 years. He leaves to cherish his life and carry on his legacy, his wife, Thomasina and three children: Tosca Dale (Notorian Jones), of Covington, GA; James Vaughn III (Pam) of Jackson, TN; Carvin Curtis Vaughn (Liza) of Nolensville, TN; seven grandchildren, Tyneka Vaughn, Cody Lamback, Sydni Vaughn, Kaitlin Vaughn, Satchel Vaughn, Cameron Vaughn, Gabriel Vaughn and a host of cousins, friends, former students, fraternity brothers and church members.

A loving husband, father and grandfather, James Jasper Vaughn Jr., age 74, peacefully transitioned to his heavenly home on April 20, 2016 with his wife and family by his side. Born November 23, 1941 in Maury City, Tennessee, James was the only... View Obituary & Service Information

The family of Mr. James J. Vaughn , Jr. created this Life Tributes page to make it easy to share your memories.

Send flowers to the Vaughn family.