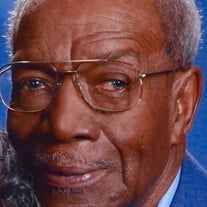 Mr. James Dan (JD) Arnold departed this life on November 19, 2015 at Jackson Madison County General Hospital. He was the son of the late Dan Arnold and Appie Arnold. He was born November 13, 1933 in Henderson County. He attended Henderson... View Obituary & Service Information

The family of Mr. James D. Arnold created this Life Tributes page to make it easy to share your memories.

Send flowers to the Arnold family.