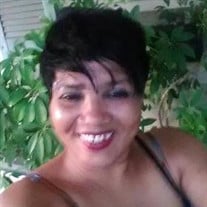 On June 21, 1962, a loud cry was heard, it was Jacqueline (Neicy) Reid entering into the world. On August 7,2019, she was given her wings to join her daughter, Shunta (Reid) Hardin, in heaven. Jacqueline was a member of Lane Chapel Church.... View Obituary & Service Information

The family of Mrs. Jacqueline Reid Hardin created this Life Tributes page to make it easy to share your memories.

Send flowers to the Hardin family.