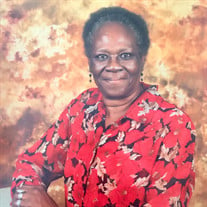 Mrs. Helen Pirtle Reid was born on November 28, 1953 to the late Raymond and Mildred Pirtle. She transitioned to her heavenly home on March 10, 2017. Helen professed a hope in Christ at an early age and united with the New St. Luke M.B. Church,... View Obituary & Service Information

The family of Ms. Helen Pirtle Reid created this Life Tributes page to make it easy to share your memories.

Send flowers to the Reid family.