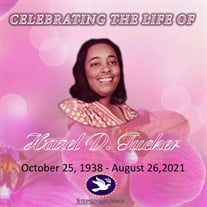 Sis. Hazel Donellon Tucker was born October 25, 1938 in McNairy County, TN, to the late Doss Holt and Mary Norman Holt, the second of four children born. Her mother was a domestic worker and homemaker. Her father was a farmer and factory worker. At the age of 14, Hazel was baptized by her Uncle, Bro David Burgess at the Meigg Street Church of Christ. Hazel received her education from the public schools of Tennessee, Missouri, and Mississippi, graduating in 1957 from Easom High School in Corinth, Mississippi. Upon graduation from high school, Hazel enrolled at Lane College in Jackson, TN, in the fall of 1957. She was selected out of over 80 students who interviewed for a secretarial job in the Dean’s Office. As freshman secretary, her duties included typing and running off copies for the Dean’s tests (for his classes), faculty memos, taking dictation and typing business letters, recording grades on permanent records, and helping with registration. Outside of her studies, she advocated for racial equality by actively participating in protests and marches during the Civil Rights Movement. She graduated from Lane in 1963 with a B.A. degree in English with certification to teach grades 7-12. A lifelong, God-fearing Christian, Hazel was a member of the Middleton and Payne Streets Church of Christ. There, she met the love of her life Alex preaching in the pulpit. They were married October 8, 1963, at the Meigg Street Church of Christ, and remained faithfully married for over 55 years. In 1967 they became the proud parents of twins, Alfie LaGrane and Sonya Simone who were truly a blessing from the Lord. Their home was also blessed in 1986 with a nephew whom they reared as a son, Edward Marvin Holt, Jr. Hazel began her teaching career in 1965 with the Haywood County Board of Education by accepting a position at Douglas School as an English and Algebra teacher. In 1966, she joined the Jackson City Schools System, accepting a position at Merry High School as an 11th grade English teacher. She earned a Master’s Degree from Trevecca Nazarene University with certification in Administration and Supervision but remained committed to her role as a classroom teacher. She continued to teach 11th and 12th grade English at Jackson Central-Merry High School until she retired in 1996. Hazel valued and cared about every student. She remembered her own struggles growing up and knew the value of education. She wanted her students to realize success in their lives. She instilled in them the value of education, good character, and appreciation of life. Hazel had a successful and rewarding career. She held membership in the following organizations: Tennessee Education Association, The National Council of Teachers of English, Association for Supervision and Curriculum Development, National Faculty Delta Teachers Academy, National Faculty Fellow, and the Local NAACP. Prior to a decline in her health, she loved: teaching and counseling young people, speaking on Ladies Day Programs, reading good books that included Christian materials, listening to good music, homemaking, interior decorating, and cooking. Hazel loved to travel and attend Crusades and Lectureships. She loved all church related activities and helping people. She spoke to the Ladies at the National Crusades in San Francisco, California. Hazel remained a member of East Jackson Church of Christ and attended until her health declined. She was preceded in death by her husband, Bro. Alex Tucker, her brother, Edward Marvin Holt, Sr., her sister, Mary Alice Holt Hutton (Lumberton, North Carolina), and her mother and father. Those left to cherish her memory include: three children: Sonya Myers, Jackson, TN; Alfie L. (Julie) Tucker, Chattanooga, TN; Edward Marvin (Tammy) Holt Jr., Memphis, TN; thirteen grandchildren: Nadia Holt, Sabella Holt, Edward Marvin Holt III, Ethan Holt, Carmen Myers, Derric Myers, Camille Myers, Alfie L. Tucker II, Tai Stigar, Mary Stigar, Febyana Stigar, Robert Stigar, Tommy Stigar; two brothers: Luke Stiger, Jackson, TN; Tommy Stigar, Tallahassee, FL. A host of nieces, nephews, and other relatives and friends.

Sis. Hazel Donellon Tucker was born October 25, 1938 in McNairy County, TN, to the late Doss Holt and Mary Norman Holt, the second of four children born. Her mother was a domestic worker and homemaker. Her father was a farmer and factory worker.... View Obituary & Service Information

The family of Mrs. Hazel D. Tucker created this Life Tributes page to make it easy to share your memories.

Send flowers to the Tucker family.