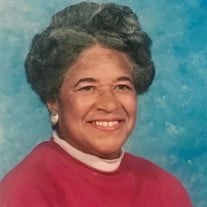 Hazel Irine Matthews was born the second of four children on January 12, 1932 to the union of the late Rev. Edward Matthews and the late Willie Mae (Herron) Matthews. Her three siblings were Crystal, James also known as “Brother” and “Big Red,” and Imogene. Hazel confessed her faith in Jesus Christ at a young age and was very active in churches in the various states in which she lived throughout her life. Hazel was preceded in death by her brother, James Matthews of Jackson, TN; brother-in-law, Calvin “Pete” Anderson of Glencoe, IL; sister, Crystal Anderson of Glencoe, IL; stepmother, Kizzie Mae Matthews of Jackson, TN; niece, Barbara Anderson of Chicago, IL; and nephew, Thomas Bernard “Butch” Merriweather of Jackson, TN. She was raised on a farm where she gained a thorough knowledge of farming and how to raise animals – specifically chickens, goats, and horses. She was educated at Matthews Elementary School, Bolivar Industrial Jr. High School, and Merry High School. While at Bolivar Industrial Jr. High School, she raised scrub goats, dairy goats, and chickens. Her father would buy one hundred baby chicks each year for Hazel to raise. Once grown, her mother taught her to sell them for profit. Every year her father would take her to the state fair, and she would watch the horse races. She would always pick the black horse to win. She loved horses so greatly her father bought her that black horse. She named him Diamond. Diamond had four gaits (four different steps). He could run, gallop, foxtrot, and pace. Hazel loved her pet horse so much she spent her allowance money buying whole oats for him. Her father, a well digger, also raised alfalfa hay and peas. While attending Merry High School, she was a star defensive basketball player. She even won two gold star medals. After graduating in 1950, she matriculated to Tennessee State University where she joined Zeta Phi Beta Sorority, Inc. She left college after three years to join the United States Air Force. Initially, she was stationed at the Francis E. Warren Air Base in Cheyenne, Wyoming, and later at the Lowry Air Force Base in Denver, Colorado. She served as a Base Supply Specialist, sang soprano in the USAF Glee Club, and played for the Air Force Basketball Team. She proudly served our country three years and three months. After leaving the Air Force, Hazel earned her bachelor’s degree from the University of Denver in music and education and her master’s degree from Colorado State University in education. She played in the University Bands and was also a member of the Tau Beta Sigma Honorary Band Fraternity. She played many instruments including wind instruments and the piano, and she taught music for a while. She later went on to teach fourth grade over fourteen years in the states of Colorado, Kansas, and California. As a lover of all animals, she raised and bred oriental chickens on her farm called Matthews Oriental Acres. She won many trophies and awards at local, regional, and statewide competitions. Because she had become a noted authority on the raising of animals, most specifically chickens, she regularly received calls requesting detailed problem solving and sundry teachings from all over the world. In addition, her special, rare breed of chickens became highly sought after so she stayed busy shipping them across the states and to several countries. Hazel spent plenty of time loving and visiting her family, near and far, always making sure to instill THE WORD OF GOD before everything else. Church and Bible Study were routine along with daily, home Bible-reading sessions. While in Denver, she took in her nephew, Butch Merriweather, from the age of about five to ten. Other times she kept nieces and nephews for summer stays and, later, made a college visit or two. Besides phone calls, she kept in touch through the lost art of good, intimate letter writing. She loved to share the family’s Indian heritage and teach it through the attending of many powwows of various tribes, books, collected artifacts, rodeos, zoos, and museums. One soon discovered that she identified by name every bird that flew through the skies and every tree over yonder. After the passing of her brother, James, in 1980, Hazel returned to Jackson to take care of her mother. Years later, she briefly moved to Lake Charles, Louisiana, and then returned to Jackson where she lived the remainder of her life. Since her early seventies, she first became affectionately known as our Beautiful Aunt Hazel, which was later refined to our BBAH (pronounced “Bee-Bah”) for our Beautiful, Beloved Aunt Hazel. Those left to cherish her precious memories are a sister: Imogene Anderson of Evanston, IL; a brother-in-law: James (Louise) Anderson of North Chicago, IL; a sister-in-law, Pearlie Mae Matthews of Jackson ,TN; several nieces and nephews: Rev. Vergie Anderson Thompson of Chicago, IL; Carolyn Woods of Evanston, IL; Deborah (Dean) Bailey of San Antonio, TX; Todd (Lena) Anderson of Evanston, IL; Rev. Jamie Anderson (Daryl) Moore of Robinson, IL; Mal Matthews of Jackson, TN; Mellonie Lazarus of Atlanta, GA; two close cousins among so many: Pearlie Mae “Tootsie” Patrick of Jackson, TN; and Leonia “Vicey” (late Anthony) Carter of Trenton, TN; close friends of special mention who really helped out in later years: Jeremiah & Kellie Cavitt and their children Knox, Sy, and Grace of Jackson, TN; Monty Arnold of Huron, TN; Charles May of Jackson, TN; Joe Anderson of Jackson, TN; and a host of other cousins, great nieces, great nephews, and friends.

Hazel Irine Matthews was born the second of four children on January 12, 1932 to the union of the late Rev. Edward Matthews and the late Willie Mae (Herron) Matthews. Her three siblings were Crystal, James also known as &#8220;Brother&#8221;... View Obituary & Service Information

The family of Ms. Hazel Irene Matthews created this Life Tributes page to make it easy to share your memories.

Hazel Irine Matthews was born the second of four children on...

Send flowers to the Matthews family.