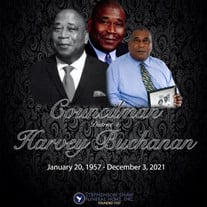 Harvey Buchanan was born on January 20, 1957, to the late James and Junetta Buchanan. He departed this life on Friday, December 3, 2021. At a very early age, he joined New Hope Missionary Baptist Church. He served in many capacities, as a choir member from youth to the Male Chorus where he loved to sing and lead various songs. He served faithfully as a Deacon ad always keeping things right and pleasing for the Lord. He attended elementary through high school in the Jackson-Madison County School System. He later attended Jackson State Community College. After graduating from Jackson State, he attended the Historical Lane Collage, were he graduated with high honors Magna Cum Laude. He met his best friend and wife Sharon Chatman during Junior High. They united in Holy Matrimony on June 22, 1980. The had two children: Veronica Lynn (His Sweet Pea as he faithfully called her) and Derrick Lamont (He called his Mini Me). He was employed at the Boys & Girls Club of America where he mentored other girls and boys as a Program Director for over thirteen years. He was advocate for encouraging all youth he encouraged to excel in life. He encouraged them to use their talents to do better their communities. He had several adopted children. During his years as owner and operator of Buchanan Exxon he was elected to the Jackson, Tennessee City Council. He served a councilman of District Four for twenty-six years. He was a powerful voice for his constituents, he worked tirelessly to better Jackson, Tennessee. He was also employed with the State of Tennessee as manager of Southwest Workforce. During his time at the State, he continued to help people. He retired in July 2020. He rarely met a stranger and had love for community service. He was affiliated with various organizations and served on many boards. He was preceded in death by his parents, grandparents, sister: Dorothy Walker; brothers: James Buchanan, Jr., Harold Buchanan, Wayne Buchanan, Charles Buchanan, Lloyd Buchanan, and Leon Buchanan. He leaves to cherish his memory his wife and best friend: Sharon Chatman Buchanan; children: Veronica (Clifton III) Love and Derrick Buchanan; sister: Sandra (Rev. James) Woods; half sister: Jessica Buchanan; brother: Anthony Buchanan; grandchildren: Christopher Love and Jeremiah Love; sisters-in-law: Beverly Buchanan, Vahness Buchanan, Jackie Buchanan, Ja’net Buchanan, Kathy Buchanan, Elaine Buchanan, Hazel (James) Ragland. Linda (Pete) Harris, Julia Pope, Gloria Halton, Gladys Chatman, Lenora Chatman, and Betty Chatman; brothers-in-law: Pete (Truda) Chatman, Evans (Jessie) Chatman, Larry Ragland, Walter Williamson, and Harvey Cox. A host of nieces, nephews, cousins, other relatives, and friends.

Harvey Buchanan was born on January 20, 1957, to the late James and Junetta Buchanan. He departed this life on Friday, December 3, 2021. At a very early age, he joined New Hope Missionary Baptist Church. He served in many capacities, as a... View Obituary & Service Information

The family of Councilman Harvey Buchanan created this Life Tributes page to make it easy to share your memories.

Send flowers to the Buchanan family.