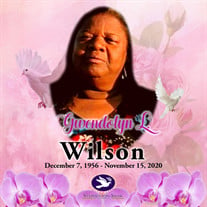 Gwendolyn Lenora Wilson “Gwen” was born December 7, 1956 to Betty Nunnally and the late Joseph Mann, Sr. She was a student at Lincoln Park High School’s in Chicago, class of 1974. She joined Tabernacle of David the House of Israel at a young age and continued to nurture and grow her faith there until she was departed from this life. Gwendolyn was known to be a caretaker and provider. She worked at various churches and buildings, ensuring that they were well-kept as she cleaned them regularly. She also worked at Hickory Bend where she mastered her culinary skills for youth in a disciplinary setting. She worked there for 3 years before leaving due to medical complications. Once she was no longer employed, she continued to provide childcare for children in the community and made money braiding hair for many families. Although she did not have much, it did not stop her from giving generously. If there was anything that someone needed or wanted, she found a way to get it for them. Gwendolyn was preceded in death by her grandmother, Ruby Wilson, sister, Jacinta Gunn and son, Delvecchio Love Gwendolyn leaves to cherish her memories her daughters Natasha Wilson, Asia (Melissa) Cole, and Rebekah Cole of Jackson, TN; mother Bettye Nunnally of Jackson , TN; grandchildren RaSean Love, Zion Harrell, Brianna Love, and Brianna Jordan of Jackson, TN; Aunt, Barbara Wilson; Siblings Joseph Mann, Jr., Juanita (Albert) Pirtle, Michael Mann, John (Mary) Mann, Simeon (Marcia) Mann, as well as a host of cousins, several of whom she loved like his own children and grandchildren, aunts, uncles, nieces, nephews and friends.

Gwendolyn Lenora Wilson &#8220;Gwen&#8221; was born December 7, 1956 to Betty Nunnally and the late Joseph Mann, Sr. She was a student at Lincoln Park High School&#8217;s in Chicago, class of 1974. She joined Tabernacle of David the House... View Obituary & Service Information

The family of Ms. Gwendolyn L. Wilson created this Life Tributes page to make it easy to share your memories.

Send flowers to the Wilson family.