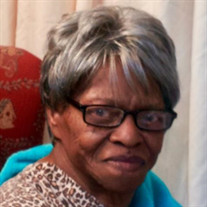 God willed it so on Sunday, May 21, 2017 at Jackson Madison County General Hospital, our precious jewel, Reverend Gracie Mae McIntee at the age of 92. She made the transitioned from her earthly vessel to her heavenly home with family by her side. She was born on May 16, 1925 on a small farm in Medon, Tennessee to the late Shade and Nancy (Tyson) Fuller. Gracie was a graduate of Denmark High School. She worked as a CNA for over 30 years. She was also member of Eastern Star. Her whole life was centered around her love for God, family, and ministering to the needs of others. In her spare time, she enjoyed quilting and gardening. Gracie accepted Christ at an early age united with Blairs Chapel Christian Methodist Episcopal Church, as a faithful servant, until her health started to decline. She served on the Missionary Board, Mattie E. Coleman Board, as a Sunday School Teacher, and Stewardess. During that time, she answered the call to preach, and with great joy she also served as a faithful and loving pastor of Medon Christian Methodist Episcopal Church in Medon, Tennessee. It has been said that Reverend Gracie Mae McIntee served the people of God in a great manner. She was united in holy matrimony to the late Mr. Willie “Jack” McIntee on February 2, 1946. With this union ten wonderful children were born. She was preceded in death by her husband, Willie “Jack” McIntee Sr; two daughters, Pearl Harris and Francis McIntee; three sons, Willie E. McIntee Jr, Marv Yvars McIntee, and Aurthur McIntee; three sisters, Louise Fuller, Lessie Fentress, and Maggie Fuller; four brothers, Isaiah Fuller, Harvey Fuller, James Fuller, and Roger Fuller. Left to cherish her precious memories are five daughters, Brenda (Abe) Simon of Beaufort, South Carolina, Beverly (Charles) Clark of East Moline, Illinois, Nancy McIntee, Evelyn (Jerry) Anderson, and Sandra McIntee all of Jackson, TN; sister, Louella Epperson of Denmark, TN; brother, Floyd Fuller of St. Louis, MI; and a host of loving grandchildren, great grandchildren, nieces, nephews, extended family and friends too many to name but not any less special. She will be always remembered as a loving mother and grandmother and whose greatest passion was helping others. She leaves us rich in memories

God willed it so on Sunday, May 21, 2017 at Jackson Madison County General Hospital, our precious jewel, Reverend Gracie Mae McIntee at the age of 92. She made the transitioned from her earthly vessel to her heavenly home with family by her... View Obituary & Service Information

The family of Rev. Gracie M. McIntee created this Life Tributes page to make it easy to share your memories.

Send flowers to the McIntee family.