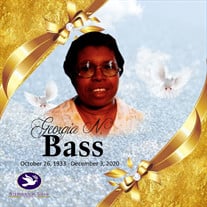 Georgia Newanda Bass began this life’s journey on October 26, 1933, as the eighth child of Hobart Burton and Pennie Burton in Henderson, Tennessee. She departed this life at the age of 87 at her home on December 3, 2020. She professed her faith in Christ at an early age and was a faithful member at Saulters Chapel A.M.E. Church. After being a dedicated servant following the wisdom of the Lord, she joined J.P. Baptist Church under the leadership of Pastor Johnny Williamson. She was a deaconess and a willing worker to do whatever was needed in the church. She attended Chester County Training School In May 1948, she married in Holy Matrimony to Mr. Robert E. Bass and to this union they were blessed with five children. She was a pillar of the community, and a hard worker who served many. She was a loving mother, loving auntie, and a loyal friend; she was a woman of great faith. She was always willing to lend a helping hand to those in need and a firm believer of visiting the sick and shut in. She was a very good cook, but most will remember her for that famous southern sweet tea. She was preceded in death by her husband Robert E. Bass, parents Hobart Burton and Pennie Burton, two children: Narvenda Bass and Eddie Bass: two brothers Thible Burton and Iva Lee Spears. Four sisters: Amanda Burton, Dolly Harvison, Rosa Woods, and Flora Gardner. She leaves to cherish her beautiful memory one son: Robert A. (Dorothy) Bass of Jackson, TN; two daughters Zelmar V. Bass and Albenda M. (Arthur) White of Henderson, TN; one grandson Jose Anderson of Jackson, TN; four granddaughters: Jeneyah (Joseph) Bass Braxton and Kirsten (Juan) Fuller both of Dallas, GA., Mononika Howard of Nashville, TN., and Shani Johnson of Jackson, TN. nine great-grandchildren, three great great-grandchildren. one brother: Silas L. Burton of Indianapolis, IN., and one sister-in-law Betty Williams of Memphis, TN. A special neighbor Denny C. Bond, and a host of nieces, nephews, other relatives, and many friends.

Georgia Newanda Bass began this life&#8217;s journey on October 26, 1933, as the eighth child of Hobart Burton and Pennie Burton in Henderson, Tennessee. She departed this life at the age of 87 at her home on December 3, 2020. She professed... View Obituary & Service Information

The family of Mrs. Georgia Newanda Bass created this Life Tributes page to make it easy to share your memories.

Send flowers to the Bass family.