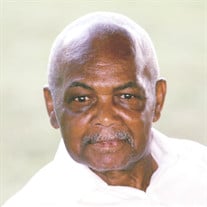 George Ivory Marshall was born May 7, 1932, in Medon, Tennessee, the fourth child born to the union of the late Elmer G. and Frances March-Marshall. George married Selma Salena Bell on November 29, 1953, in Hollandale, MS., and to this union,... View Obituary & Service Information

The family of Mr. George Ivory Marshall created this Life Tributes page to make it easy to share your memories.

Send flowers to the Marshall family.