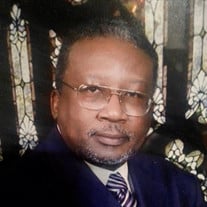 Fred Henry Jones was born June 25, 1950 in Jackson, TN to the late Lucille and Fred Henry Jones Sr. The eldest of three sons, Fred received his formal education through Madison County TN School System. He continued his education at Lane College where he received a bachelor’s degree in History in 1974. At an early age, he confessed Christ as his savior. Fred joined Triumph Kingdom of God in Christ Church where he was a member of the male singing group, Triumph Harmonizers. While attending Lane College, Fred met and married his first wife, Betty Faye Deener. During their 20 years union, their only son, Gerald Lamonte Jones, was born. Later in life, Fred married Jewell Clark and became stepfather to her three children. During his life, Fred was blessed to be able to explore a career as an insurance salesman, employee at Proctor and Gamble, which he later retired as well as pursue his dream of owning two successful businesses, J & J Grocery and CD Warehouse. Fred was preceded in death by his mother, father and his brother, Marvel Jones. He leaves to cherish his memory, his son Gerald (Crystal); step-children Tonya Franklin, John Franklin and Kristen Clark; brother, Tommy Jones; nephews, Carlos Roberson, Marvel Jones Jr and Leqarious Jones; one niece, Angela Carroll and a host of cousins, other loving relatives and friends

The family of Mr. Fred Henry Jones Jr. created this Life Tributes page to make it easy to share your memories.

Send flowers to the Jones family.