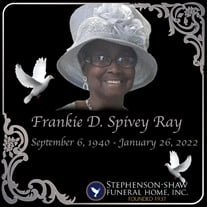 Frankie Spivey was born September 6, 1940, to the late Mr. & Mrs. Henry T. (Nevada Hardin) Spivey. She was the eldest of six children. Frankie lived life vivaciously through her love of church, family, and friends. Frankie had a glow like no other. She had personality and (boy) did she have style. Early in life, Frankie was baptized and became a faithful and active member of Bethlehem #2 Missionary Church. She loved, loved, loved her church and she loved to sing. Frankie was a dedicated choir member, served on several committees and loved spearheading annual programs. She was recognized by the Jackson Madison County Baptist Ministerial Alliance for Effective Church Leadership and was an amazing fundraiser who always looked for a good cause that truly benefited others. Frankie was a proud graduate of West High School, Class of ’59, where she was a member of the championship varsity basketball team—Go Tigers—Go Blue and Gold!! Frankie was also a graduate of Eddings Beauty School and was a licensed cosmetologist/aesthetician. She was a retiree of Aurora Foods (formerly Quaker Oats) where she enjoyed working alongside so many of her friends. Frankie was the widow of Mr. William Roosevelt Ray and they were married for over 31 years. Together they enjoyed visiting the sick, traveling, going to church functions, dining out and attending sporting events. Frankie loved her family and was so happy to receive a friendly visit from “every” one of them. Frankie was always thinking of others, never wanting to exclude anyone. Frankie loved to cook and put her culinary skills to good use preparing delicious meals for her family and friends. She was also a superb baker—those homemade carrot cakes, chocolate pies, pineapple-coconut cakes, on and on. It was a bright spot in her day to see others happy and having a good time. She was always opening her heart and her home to others. Frankie touched the lives of so many. She was an encourager, motivator, and mentor. Frankie encouraged others to reach beyond their limitations. Because of Frankie's persuasiveness, several of her church and family members now readily participate on programs and are actively involved in different church and community activities. They are no longer afraid of public speaking and enjoy carrying the torch. The work that Frankie has done speaks volumes and will have a lasting impact on Christ's Kingdom. Frankie never liked confusion and always wanted to have peace. "Blessed are the peacemakers for they shall be called the children of God." (Matthew 5:9) She had an infectious smile that would light up any room. She was truly like a ray of sunshine and her signature song, "One More Sunny Day" captured the essence of the radiance that she displayed. Frankie was a beautiful person with a love for Christ. The time was predestined, and the atmosphere was tranquil. Frankie had a little talk with Jesus and softly whispered, “For I am ready to be offered, and the time of my departure is at hand. I have fought a good fight, I have finished my course, I have kept the faith.” (II Timothy 4:6-7) God gently held her hand, rubbed her brow, provided comfort and peace to her mind, body and soul and gave her sweet rest during her transition home. Frankie departed this life Wednesday, January 26, 2022, at the Baptist Memorial Hospital in Collierville, Tennessee, with her daughter by her side. Frankie was preceded in death by her parents, spouse, sister--Lou Jackson, brothers--Wil Spivey and Eugene Brantley, niece--Sharon Cole. She leaves to cherish her memory: daughter--Geraldine (Keith) McBride, Collierville, TN; son--Kenneth (Cheryl) Spivey, Jackson, TN; stepchildren---William (Charlotte) Ray, Jr., Bartlett, TN; Tina (Prentice) Doaks , Antioch, TN, Daphne Ray, Antioch, TN; sister---Betty (Ray) Woods, Henderson, TN; brothers--- Larry (Brenda) Spivey, Jackson, TN, Floyd (Alberta) Spivey, Hendersonville, TN; grandchildren---Keith McBride II, Mia Spivey, Mya Spivey, Jeremy Joy, Janessa Joy, Bradley Joy, Yaden Taylor, Ryan Ray, Chloe Ray, Johnathan Doaks, Chelsea Doaks; aunt---Ida Chapman; sister-in-law---Catherine Brantley; nieces and nephews---Jeanette Spivey, Kimberly Holt, Alan (Tiffany) Spivey, Lisa (Terrell) Brooks, JaMilia Gerthoffer, Jacoby Taylor, Terry (Tara) Spivey, LaQuanda Spivey, Marcus Smith; great nieces and nephews---TaVondant (Michele) Cole, Courtney (Ashley) Cole, Niko Cole, Allison Spivey, Tarria Holt, J’Menski Holt, Arial Donnell, Avery Brooks, Amiya Whiteside, Ashlyn Taylor, Vonterius Cathey, Terry “TJ” Spivey, Jr., Elyanah Smith; cousins ---Lou Brooks, Sarah Curry, Lizzie Ruth Dunn, Emma Lou Embry, , Sabrina Franks, Marlyn Hill and a host of cousins, great-great nieces and nephews, special friends, classmates, co-workers and more.

Frankie Spivey was born September 6, 1940, to the late Mr. & Mrs. Henry T. (Nevada Hardin) Spivey. She was the eldest of six children. Frankie lived life vivaciously through her love of church, family, and friends. Frankie had a glow like... View Obituary & Service Information

The family of Mrs. Frankie D. Spivey Ray created this Life Tributes page to make it easy to share your memories.

Send flowers to the Ray family.