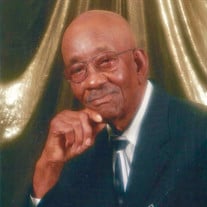 On September 12, 1930, Forrest Clinton Shaw began his journey through life. For on this day he was born to Willie Lou Bond Shaw and Herman Hector Shaw in Brownsville, TN. On Friday afternoon, December 14, 2018, God called his faithful servant... View Obituary & Service Information

The family of Mr. Forrest C. Shaw created this Life Tributes page to make it easy to share your memories.

Send flowers to the Shaw family.