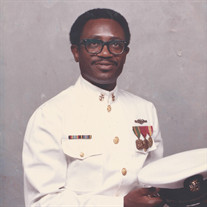 MMCM Flynoid DeLaSalle Gregory (Flint), of Bells, TN was born to the late Walter & Hassie Mae Gregory on August 28, 1942, the youngest of 9 children. He went on to be with the Lord, Sunday, August 06, 2017 at the Tennessee State Veterans Home in Humboldt, TN. Mr. Gregory joined Wortham Chapel M.B. Church at a young age. He accepted Christ late in life at the age of 45, rededicating his life and getting baptized again. He served the Lord dilligently. He received his education in the Crockett County School System and was a 1960 graduate of Central High School. He then continued his education at Tuskegee Institute in Alabama. In 1962, he joined the U.S. Navy, where he served on three nuclear submarines and numerous installations, retiring at the rank of Master Chief Petty Officer, after twenty-two years. In 1964 he united in marriage to Martha Ann Steward, and they raised three sons, Victor, Kenneth and Michael. After retiring from the Navy in 1984, Flynoid (Flint) took a job with General Electric as an instructor in Nuclear Energy Operations at their Morris Illinois Facility. After several years, Flint then went on to work for Union Electric at their Callaway Plant in Fulton, MO, as their Training Supervisor before retiring after fourteen years, to return back home to Alamo, TN. Flint was very active in the community during his second retirement. He only slowed down when his health would not allow him to go on. He worked with the Central High School Alumni Association, serving two terms as President. As well as, working with the Crockett County Skill Center, managed Pine Grove Apartments, active with the Crockett County Gideons serving as a board member of the Crockett County Senior Center and NOAH, working with the Crockett County Veterans Memorial Committee and the Crockett County Chamber and County Mayor on the “Help Keep Crockett County Clean Campaign.” In 1971, Flint was listed as one of the “Outstanding Young Men of America” and named Man of The Year of Alamo in 2006. He also served as a Crockett County Commissioner and a City Alderman. He was preceded in death by his parents; three brothers and one sister, Willie, James and Harvey Gregory and Dorothy Gregory Smith. Flint leaves to cherish his memories, his wife of fifty-three years, Martha Gregory; three sons, Victor Darryl (Avis) Gregory of Charlotte, NC, Kenneth Maurice (Crystal) Gregory of Columbia, MO, and Michael Steward Gregory of Jefferson City, MO; three grandchildren, Shana Marie Gregory and Tayler Alexandria Gregory of Columbia, MO and Xavier Malachi McKelvy of Jackson, TN; one great-grandchild, Jayce Maurice English of Columbia, MO; three brothers, Riley (Hadesther) Gregory of Brownsville, TN, Walter (Ardella) Gregory of Las Vegas, NV and John (Gwen) Gregory of San Bernardino, CA; one sister, Bennie Lee Buchannan of Bolivar, TN; two sisters-in- law, Jimmie Mae Hudson of Alamo, TN and Harriet Gregory of Memphis, TN; one brother-in-law, Napoleon Steward of Alamo, TN; a special thanks to lifelong friends, John Reddick and Jimmy Nolen; and a host of many nieces, nephews, cousins and friends.

MMCM Flynoid DeLaSalle Gregory (Flint), of Bells, TN was born to the late Walter & Hassie Mae Gregory on August 28, 1942, the youngest of 9 children. He went on to be with the Lord, Sunday, August 06, 2017 at the Tennessee State Veterans Home... View Obituary & Service Information

The family of Mr. Flynoid Gregory created this Life Tributes page to make it easy to share your memories.

Send flowers to the Gregory family.