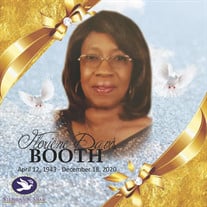 Floriene Davis Booth was born on April 12, 1943 to Delores Virginia Smith and later adopted by her mother’s first cousin Mary Berniece Jackson and her husband, Reverend Moses “MJ” Jackson. She departed this life on December 18, 2020 in Southfield, Michigan. She was educated in the Chester County Public School System in Henderson, where she graduated in 1961. In that year she was married to the late Oscar Harbor (preceded in death July 1969) and to this union two children were born. In 1970 she married the late Joe Davis (preceded in death June 1995) and three children were born to their union. She worked outside the home for many years at Slant & Slant Company and Chester Manufacturer while running her household and raising her children. She accepted Christ at an early age and later joined Mount Zion CME, where she served in different capacities until she moved to Pontiac, Michigan in 2000. While in Pontiac she worked for the Palace of Auburn Hill, the former home of the Pistons basketball team. She loved the Pistons and was a huge fan of theirs. They put a smile on her face like no other. As a bonus she worked at the Palace arena until she retired in 2004. She was always active in the church and she joined Friendship Missionary Baptist Church where she served as a nurse and various additional functions to support the community. In 2007 she married the late Zach Booth of Pontiac; Michigan and they were married until his death in 2015. Preceding her in death are her mothers’ Virginia Smith-Johnson and Mary Berniece Barmore; her father: Rev. Moses “MJ” Jackson, and stepfather Albert Barmore; her husbands: Oscar Harbor, Joe Davis and Zach Booth; two brothers: Henry and Robert Barmore and one nephew Henry Barmore Jr. In her life journey, she has five beautiful children which she adored and are left to cherish her memory: Mary (Marland) White and Lynn Harbor, both of Southfield, Michigan. Joe (Patricia) Davis, Jr. of Fort Worth, Texas. Ethelene Davis of Bloomfield, Michigan. Tyrone (Tamara) Davis of Henderson, Tennessee. She was equally dedicated to her five grandchildren: Shamira Harbor (Christopher Ivory) of Detroit, Michigan, Joe (Tramisha) Davis III of Lee’s Summit, Missouri, LaTiah Davis of Fort Worth, Texas, Nuesha Davis of Pontiac, Michigan, and Terrence Davis Jr. of Henderson, Tennessee. Three great-grandchildren: Licelte, Jiovanna, and Jinisis Davis of Lee’s Summit, Missouri, and a God great-granddaughter Ernita Broadnax of Adrian, Michigan. Two brothers: Russell (Beverly) Barmore of Phoenix, Arizona, and Phillip (Ann) Barmore of Martin, Tennessee. She also leaves to cherish her memory a host of relatives and friends. If you ever met Floriene you know she was a giving, devoted and helpful person who loved her family. Nevertheless, do not miss pronounce her name or spell it wrong she would let you know about it. She was affectionally known to some as “Lady Soul” which was one of her favorite songs by the Temptations. As our mom and grandmother, she was our Lady Soul she warms our hearts and our souls. She made us whole and we are forever grateful for her charisma and affection. “I Can’t Give Up” by Lee Williams was another of her favorite song for many reasons. She understood that sometime while on this journey our bodies get weak with pain, but she knew that all her worries, all her works down here will not be in vain. She lived her life with tenacity, endurance, faith, hope and love. She would want all of us to take inventory of our lives and look up and do not give up.

The family of Mrs. Floriene Davis Booth created this Life Tributes page to make it easy to share your memories.

Floriene Davis Booth was born on April 12, 1943 to Delores Virginia...

Send flowers to the Booth family.