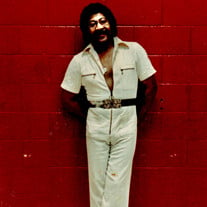 Mr. Farris Lanier, Jr., a Jackson, Tennessee native and music icon was born on January 23, 1949, by a mid-wife at the family home located at 716 East Baltimore Street in Jackson, Tennessee, to Laverne Crayton Lanier and Farris Lanier, Sr. He passed away on November 21, 2019, after a long illness. Mr. Lanier was a founding member of the band “The Jacksonians” that went on to attain renowned fame under the group’s new name “Lanier & Company.” Mr. Lanier obtained his education through the Jackson Public Schools, attending Washington Douglass Elementary School, Merry Junior High School, and Merry High School - the school that held a special place in his heart. He was a proud 1967 graduate of Merry High School. Mr. Lanier attended The Tabernacle of David, the house of Israel, where, up until his passing, he was a devout member. Mr. Lanier was a dedicated employee at Kisbers department store in Jackson, Tennessee, from 1971 until the onset of his illness in 1990. He loved his job and his co-workers, and customers love him more. Above all, his family loved him dearly. His mother and father lovingly called him “June” and his siblings affectionately called him “Fah Jr.” Mr. Lanier attained many accomplishments in his life. In 1982, Mr. Lanier made a guest appearance on American Bandstand, performing with “Lanier and Company.” Mr. Lanier and the band toured South Africa; Kingston, Jamaica; Europe; London, England; Canada; and several states in the United States, including Hawaii. On August 13, 1999, Sigma Gamma Rho Sorority awarded him the Pioneer Music Award. On August 10, 2013, he was inducted into the Rockabilly Hall of Fame. Mr. Lanier, his brother Fayette, and his cousin Charles Whitelaw were the first Black athletes to play on the American Legion Baseball team in Jackson, Tennessee. He was an avid Dallas Cowboys and St. Louis Cardinals fan. Mr. Lanier was preceded in death by his father the late Farris Lanier, Sr., and a brother Fayette O. Lanier. Mr. Lanier leaves to cherish his memory his mother Mrs. Laverne Lanier, two brothers Marlon F. Lanier and Fenoye Lanier, and a sister Mona Lisa Lanier all from Jackson, Tennessee; two aunts Ebbie Lanier of Jackson, Tennessee, and Magnolia Crayotn of St. Louis, Missouri. He also leaves a host of nieces, nephews, cousins, and close friends.

The family of Mr. Farris Lanier Jr. created this Life Tributes page to make it easy to share your memories.