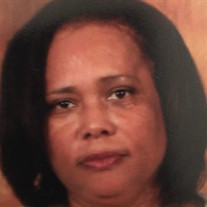 Fannie Lue Golden, 62, of Jackson, Tennessee formerly of Decatur, Illinois passed away on Friday, October 26, 2018 at Jackson General Hospital. Fannie was born on June 7, 1956 in Brownsville, TN the daughter of Calvin Lee Golden and Lucy Mae (Boyd) Williams. She grew up in Chicago, Illinois and later moved to Decatur, Illinois. She married Herman Mac Page on September 23, 1974 together they raised three children, Derimus, Danielle and Herman III. She retired from the Illinois Department of Human Services where she worked for many years as a case worker. She was a past member of the Community Church of God in Decatur, Illinois. In 2010, she moved to Jackson, Tennessee to be closer to her family. She became a member of St. John’s #2 Missionary Baptist Church under the leadership of Pastor Arthur Hannah. Fannie was a former Girls Scout Leader and loved to play softball. She had artistic fingers and enjoyed making afghans, especially as baby gifts. She loved travelling and spending time with her entire family. Her memories will forever remain in the hearts of her children: Danielle (Tommy Smith) of La Vergne, TN and Herman Mac Page III of Decatur, IL; two sisters: Molly (Ricky) Miller of Denmark, TN and Mildred (Charles) Bond of Jackson, TN; stepmother, Ernestine Golden of Chicago, IL, lifelong friends, Crystal and Christopher Bragg of Mt. Zion, Illinois; 5 grandchildren, 1 great grandchild and a host of nieces, nephews, cousins, extended family and friends. She was preceded in death by her parents, grandparents, son, Derimus Golden and a niece.

The family of Ms. Fannie Lue Golden created this Life Tributes page to make it easy to share your memories.

Send flowers to the Golden family.