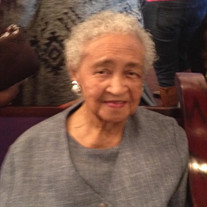 Mrs. Ethel Alice Johnson Thomas was number six of nine children born to the late Obie McHaney Johnson and Rufus Johnson of Pinson, Tn. on September 2, 1924. She departed this life on July 2, 2017 at Dekalb County Medical Center, Decatur Ga. She professed a hope in Christ at an early age and became a member of the Mt. Pleasant Missionary Baptist Church. She maintained a lifetime focus on that hope in Christ that strengthen, her, her family, friends and church eternally. She was educated in the public school system of Madison County. She worked alongside her husband and family as a successful Farmer, later they started a construction business. She was also employed for 30 years as a salad maker for Morrison Cafeteria/Ruby Tuesday’s Restaurants. Mrs. Thomas received a simple education and vocation, yet held to the simple truth of Proverbs 16:3, Commit your works to the Lord and your plans will be established. Miss Ethel Alice Johnson was united in holy matrimony December 24, 1942 with the love of this life and her sole mate Mr. Frank Ballard Thomas. From this union seven children survived: Mr. Lynotha Thomas (Mary) of Jackson Tn., Mrs. Merilyn Gunn (Wallace) of New Albany In. Mr. Richard Thomas (Vernell) of Pinson, Tn., Mrs. Crystal Beasley (Marvin) of Decatur Ga., Mr. Dennis Thomas (Rosie) of Pinson Tn. Mr. Jerry Thomas of Pinson, Tn. And Mr. Michael (Marilyn) of Pinson, Tn. She also leaves to cherish her memory: One sister, Mrs. Lerlene Brooks of Akron, Oh. A host of grandchildren, great-grandchildren, nieces, nephews and other relatives and friends. “We love you, forever: mama, grandmamma, aunt Ethel, Tiny or aunt Tiny whichever way you respond!”.

The family of Ms. Ethel Alice Thomas created this Life Tributes page to make it easy to share your memories.

Send flowers to the Thomas family.