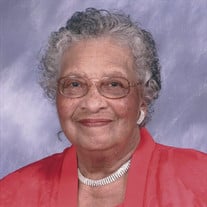 One of her favorite Bible verses (and she had many) was: Be careful for nothing; but in everything by prayer and supplication with thanksgiving let your reqllf:sts be made known unto God. And the peace of God, which passeth all understanding, shall keep your hearts and minds through Christ Jesus. Philippians 4:6-7 On this occasion, we are here for the Home going Celebration of the Life of Sis. Esther Lee Williams. A true servant of her Lord and Savior Jesus Christ who tried to lived her life with hope that others would see the goodness of Him through her works. She was a loving and encouraging person as a mother, grandmother, great grandmoth r, dear friend, and other families, friends and acquaintances. She was a God-fearing wo , and devoted Christian. Esther Lee Williams was born January 10, 1930 i'he late Ed Caldwell and Wise Mays also raised by her stepfather Neal Mays in Jackson Madison County, Tennessee. She was educated in Madison County TN. At an early age she was united in Holy ma­trimony to the love of her life the late Eddie C. Williams on July 26, 1945 and shared 31 years of marriage until he preceded her in death in 1977. To this union two daughters and o e son were born. Esther obeyed the Gospel of Jesus Christ under the tea­ching of Bro. Walter H. Vance and was added to the Cumberland & Hunt Street (now East Jackson Street) Church of Christ in 1957. Her husband served as a minister and she traveled for many years with her children to Lucyville Church of Christ (now North Henderson Church of Christ) Henderson, TN, Roach Street Church of Christ - South Fulton, TN and Madison Street Church of Christ - Lexington TN. As a member of the East Jackson Church of Christ she served and attended faithfully for many years until her health began to decline. Anyone tbat met Esther knew that she was dedicated to leading souls to Christ. She modeled what it meant to be a true Soldier of the Cr s through her love and actions. She was recognized with a Soldier of the Cross Award along with other Senior Saints Award an was a passion ',I committee member responsible for maintaining the of Elmwood Cemetery. Her love knew no limits and her so f, diated ty. She was dedicated to serving through love. Her employment with a Photo Shop and a retail sales clerk at se er al retail business namely The Davis Store, Luciens and Kents. For a brief period of time she was employed by the fker Oats Company as a Package Operator and as a caregiver and assistant for several families in this area. She loved her daily Bible reading, singing and listening to gospel music. She used to tell us, in the words of the song, "If I Can Help Somebody As I Pass Along The Way Then My Living Shall Not Be In Vain. " After an extended illness, on or about 1 :00 p.m. Wednesday, August 29, 2018, in the presence of family and friends, she peace­fully started her eternal journey to be with her Lord and Savior Jesus Christ from her home in Jackson, TN. Esther was preceded in death by her husband Eddie C Williams, mo Wise Mays, father Ed Caldwell and Stepfather Neal Mays. Siblings: Brothers: Price Puckett- Toledo, OH, Ed Caldwell, uisville, KY, George Caldwell - Louisville, KY, James Caldwell- Bloomington, IL, Wille Ed (Sonny) Estes - Louisville, KY, ymond Mays Sr. - Jackson, TN, Hosea Mays - Milan TN, Walter (Bubba) Mays - Jackson, TN Sisters: Mary Alice Akers - Louisville, KY, Clyde Elizabeth Savage - Detroit MI, Virgie Mays - Jackson, TN, Arneather Reid- Jackson TN and de:U- friends Mrs. Ora Reeves ( Reeves Family) Mr. Curtis Godwin (Godwin Family) and Mr. Sylvester Glenn ( Govan Family). Esther will forever be remembered and cherished by her dear loved ones. She leaves behind one sister Malinda C. Lusby - San Angelo, TX, three children, Barbra Fowler (Robert) -Jackson, TN, Rebekah Williams Pettigrew - Jackson, TN; Rickey Williams (Shonda) of Frisco Texas; and Edna Cox- Jackson, TN not her blood daughter but a daughter of her heart. 16 grandchildren, Courtney Evans (Lee), Joylynn Sheffield (Tip), Trey Pettigrew, Rickelle Williams, Ryann Sheree Steele (Charles), Chanelle Wil­liams, Cierra Kelley (Nicholas), Melanie Williams, Justin Pettigrew (Gabriel), Avery Jackson, Maurice Pettigrew, Nicole Fowler, Robert Fowler (Kelley); John H. Parrish III, John L. Parrish, and Deborah Parrish; 12 great-grandchildren, 1 great great grand child and a great great grand son due to arrive in the coming weeks. Sisters-in-laws, May Evelyn McCorry, Barbara Estes, Marie Caldwell, andArletter Williams; and another close family member George Pettigrew (Janice) along with a host of nieces, ne­phews, crousins, and other cherished loved ones family, friends and acquaintances. Walter Bonds, who she referred to as one of her many sons and would visit and bring meals and information to her from different church functions especially Senior Saints Activities. Not to forget all of other her adopted daughters and sons of the East Jackson Church of Christ.

One of her favorite Bible verses (and she had many) was: Be careful for nothing; but in everything by prayer and supplication with thanksgiving let your reqllf:sts be made known unto God. And the peace of God, which passeth all understanding,... View Obituary & Service Information

The family of Mrs. Esther L. Williams created this Life Tributes page to make it easy to share your memories.

One of her favorite Bible verses (and she had many) was: Be careful...