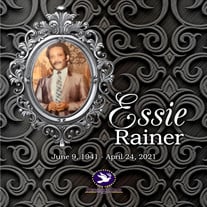 On June 15, 1941, a son was gifted in mortal flesh and laid in the arms of Essex Rainer Sr. and Zadie Rainer. They named him Essex Rainer Jr. After his father. He was the youngest of six siblings. He ended this battle on April 24, 2021. He attended the public school system in Jackson, Tennessee. As a young man, Essie played baseball at the Cotton Grove Road Baseball Park on the weekends. He was a distinguished fast curve ball pitcher, people came from towns near and far to see the boy that could throw a “Hack Rainer”, a fast curve ball like you have never seen. Every weekend his team played he delivered the pitch; Strike 1, 2, 3, you are out, one batter after another. He joined the United States Army, 101st Air Borne Division; Fort Campbell, Kentucky. He loved being a Parachute Trooper. He would jump for his friends. He had a love for attractive things, he loved beautiful cars. One of his favorites was a 1965 Red Convertible Thunderbird with a White drop top. He was as an extremely well dress man. He married one of the most beautiful young ladies in Jackson, Tennessee, Nell Smith on June 9, 1965 at her parents’ home on Lincoln Street. This came to a great shock to Mrs. Mary, Nell's mother! she finally gave them her blessing! the rest is history! To this union are two children Mia Moniquel Rainer and Marlon David Rainer. This has been a love story for 56 years. He and Nell were so in love until he departed this earth. They loved each other so much from a distance it was like watching a love story. He and Nell appeared to be a match made in heaven, they were the perfect couple. You could see the love they had for each other. As He and Nell traveled around the world, he picked up the hobby of Bowling. He told the stories of how he would bowl until his hands were raw and sometimes bleed. He would often talk about how he could put a spin on the bowling ball like he did on the baseball. After leaving the military and returning to Jackson. He and nell decided to make Jackson their home. He started a new career with the United States Post Office, he loved his job at the post office and shared lots of stories with us. He accepted Jehovah as his personal savior and was baptized in the kingdom hall where he was a faithful member. To know him was to love him. Essie loved his wife, children, and family. He also loved fishing. While living with his sister Almeta she taught Essie how to fish. Her children had to go along so we picked up on the sport as well. Treasure, Onita, Melvin, and then Essie, taught Marlon to fish. They all became obsessed with the sport. What a great memory to have of a great husband, father, grandfather and uncle and cousin. He was preceded in death by his siblings: Willie Mae Shaw, Almeta Henning, Albertine Weddle, Ethel Reed Transou and Nathaniel Rainer. He leaves to celebrate his life and cherish his memories his wife of 56 years Nell Smith Rainer; daughter: Mia Moniquel Rainer (Jimmy) Clark; son: Marlon David (Angela) Rainer; seven grandchildren: Mercedes Rainer, Tyler Harper, Justin Clark, Brent Rainer, Alexis Rainer, Alicia Rainer, Aleia Rainer; seven great- grandchildren: Richie Clark Jr., Makaya Rainer, Mariah Harris, Makinlie Harris, Madisyn Miller, Avery Harper, Noah Harper. a special niece: Onita Robertson; brother-in-law: Joe (Maria) Smith and a host of nieces, nephews, other relatives and friends. Hopefully, you may always remember him. to have known him was to love him. Whatever you may have called him: Daddy, Granddad, Jr., Junior Rainer, Hack Rainer, Uncle Essie, or just plain Rainer.

On June 15, 1941, a son was gifted in mortal flesh and laid in the arms of Essex Rainer Sr. and Zadie Rainer. They named him Essex Rainer Jr. After his father. He was the youngest of six siblings. He ended this battle on April 24, 2021. He... View Obituary & Service Information

The family of Mr. Essie Rainer created this Life Tributes page to make it easy to share your memories.

Send flowers to the Rainer family.