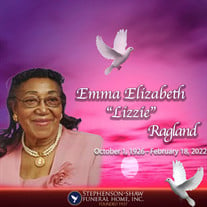 Emma Elizabeth (Lizzie) was born on October 1, 1926 in Madison County, Tennessee to loving parents Archie Campbell and Birthel Campbell. Lizzie married Clifton C. Ragland July 7, 1947 and had nine beautiful children, they spent over 60 blissful loving years together until his reward on February 8, 2008. Lizzie was baptized at an early age of 16 at the Hale Street Church of Christ. She has been with the same congregation while it grew to the East Jackson Church of Christ where she was one of the oldest member. Lizzie as a Preachers wife whole heartily supported Clifton as a minister at the many congregations where he ministered; all the while working and raising nine children She was a faithful member of the East Jackson Church of Christ at the time of her reward. Lizzie began working at age 14 doing housekeeping, and as laundry plant worker: She later worked as a Salad Chef at various restaurants. Lizzie later became a Certified Nursing Assistant. Lizzie had a long career as a Nurse's Assistant at various nursing homes and a Care Giver to many elderly patients until well into her eighties, until her children convinced her to retire. Lizzie enjoyed helping, advising, cooking for others, traveling, planting flowers and gardening She was an angel and a saint who was kind, forgiving, and compassionate her family and friends relied on her. She would correct you when you were wrong but would always forgive and love you She was adored by so many people that she helped, her family , friends, her children friends, and grandchildren, her home was a safe haven for all that needed a place to stay. She treated everyone as family. Lizzie was still cooking big Sunday meals until she went home to be with our lord. Lizzie was preceded death by her husband: Clifton Ragland; son: Iven W. Ragland and daughter: Gwen Ragland Long; parents: Birthel Campbell; father: Archie Campbell; Siblings: GC Campbell, Willie E. Campbell, Clifton Ray Campbell, and sister Linda Campbell Dupree. She leaves to cherish her memory seven children: Charles (Linda) Ragland of Oceanside, California, Billy Ragland and Ronnie Ragland both of Tucson, Arizona, Wendy (Paul) Chambers of Chicago, Illinois, Gary (Gwen) Ragland, Tilda (Craig) Pearson, Perry Ragland, and Terry Willis Ragland, all of Jackson, Tennessee; Siblings: Arthur Campbell, Booker T. (Terry) Campbell, Archie B. (Doris) Campbell and Patty Gene Pettus all of Indianapolis, Indiana, Willie Mae Whiteside and Eunice Exum both of Jackson, Tennessee and Pearline Mathis of Dumas, Arkansas; twenty-seven grandchildren; forty-three great-grandchildren; six great-great grandchildren and a host of aunts, uncles, nieces, nephews, cousins & friends

The family of Mrs. Emma Elizabeth "Lizzie" Campbell Ragland created this Life Tributes page to make it easy to share your memories.

Send flowers to the Ragland family.