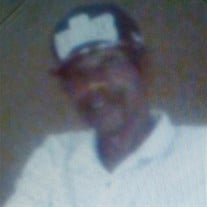 Elvis &#8220;Boo&#8221; Triplett was born on December 25, 1954 to the late Robert Triplett and Alma Lucille Hall. After a long battle with cancer, Elvis was called home on April 22, 2018. Elvis was preceded in death by his parents, Robert Triplett... View Obituary & Service Information

The family of Mr. Elvis Triplett created this Life Tributes page to make it easy to share your memories.

Send flowers to the Triplett family.