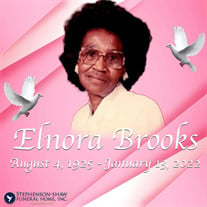 Elnora Floyd Brooks (Nonie) was born in Madison County, Tennessee on August 4,1925. She was the fifth child of eight born to the late John Henry and Artensia Hill Floyd. Elnora Brooks, entered into eternal rest on January 13, 2022, at the Bells Nursing Home and Rehab Center. She was educated in the Crockett County school system, and confessed her love of God at an early age at Bascom CME Church. In her young adult life, she married Charlie Brooks, who affectionately called her “Tiger” and she lovingly called him “Baby”. They were married in 1945 for over 60 years and to this union there were 3 children. Barney Joe Brooks, Gail Y. Floyd and Sheila T. Brooks. Shortly after her union, she and her husband joined Macedonia Missionary Baptist Church. There they celebrated their faith by serving God for many years – he as a Deacon and she as the Church Secretary. Charlie and Nonie initially resided in Fruitvale, TN and relocated to Bells, TN where they lived for over 50 years. Elnora Brooks was a proud member of the Eastern Star, Rose of Sharon Order #88 of Bells for many years. She loved her Church and Eastern Star Order and was very involved until her health declined. One of her special talents was her gift to gab. She loved to talk and referred to herself as “The Mouth of the South”. Anyone who knew her, knew no one was a stranger to her. Nonie would strike up a conversation with anyone no matter their age, race, creed or color. She loved to read, listen to music especially blues and jazz, crochet, quilt, complete crossword puzzles and was a collector of all things. Nonie was also an avid traveler. She traveled extensively with the Eastern Stars, to various national medical conventions and numerous family reunions. She was preceded in death by her husband, Charlie Brooks; daughter, Sheila T. Brooks; grand-daughter Ottillia Plunk and all of her seven siblings Russell L. Floyd, Eula V. Taylor, Margarite Hicks, Mayme E. Pryce, Richard S. Floyd, Gloria D. Patterson and Barbara J. Floyd. She leaves behind to cherish her memory her beloved son, Barney Joe (Ollie) Brooks of Gadsden, TN; beloved daughter, Dr. Gail Y. Floyd of Chicago, IL; grand-daughter, Dr. Sonya F. Brooks of Nashville, TN; grandson, Gregory Floyd of Brooklyn, NY; great-grands Ethan Shutes, Jackson Plunk and Nora Plunk; a dear sister-in-law, Molly Brooks; surrogate daughters Erma (Josie) Johnson and Marilyn Long; a host of Oliver-Floyd and Brooks nieces, nephews, grand-nieces, grand-nephews, cousins and many, many friends. In lieu of flowers, the family requested that you send your donations to the New Macedonia Baptist Church Cemetery Fund - 1243 Macedonia Road - Fruitvale, Tennessee 38336

Elnora Floyd Brooks (Nonie) was born in Madison County, Tennessee on August 4,1925. She was the fifth child of eight born to the late John Henry and Artensia Hill Floyd. Elnora Brooks, entered into eternal rest on January 13, 2022, at the Bells... View Obituary & Service Information

The family of Mrs. Elnora Brooks created this Life Tributes page to make it easy to share your memories.

Send flowers to the Brooks family.