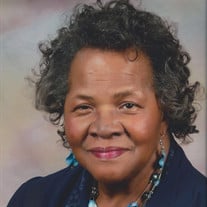 Ella Mae Nunnally was born April 9, 1943, to the late Issac Hayes, Sr., and Daisy Mae Perry. Known as “Ella Mae” to most, she departed this life on January 3, 2016. During her lifetime, Ella Mae was a dedicated member of the Tabernacle of David the House of Israel, remaining a faithful member until her death. Ella Mae attended school in the Jackson Madison County School District. Although she was a licensed beautician and worked for many years at Bruce Lumber Company, Ella Mae was most noted for her amazing culinary talents, which were displayed in her employment with Fox Restaurant, New Southern Hotel, Royal Street Cafe, Lambuth College, and the McWherter family. People throughout West Tennessee and beyond knew her for her famous “Pound Cake” and many other superb dishes. Her client base could be found in local West Tennessee towns, international cities, and even the Jackson Energy Authority (JEA). These tasty meals were transported by UPS, the friendly skies, and personal deliveries. Ella Mae’s recipes were unduplicated; yet it is well known that an ounce of Love and a dash of Compassion went into each dish that she prepared for family, friends, and customers. In addition to her extraordinary culinary skills, Ella Mae was also known for her infectious sense of humor, and she was considered a “jokester”; her comedic antics brought smiles to faces and eased the souls of almost everyone who encountered her. Ella Mae was preceded in death by her parents and husband Ellihue Nunnally, Sr.; son Ellihue Nunnally, Jr.; two sisters Rose Perry and Alma “Cheetah” Mitchell; and three brothers Leon Hicks, Charlie Mitchell, and Issac Hayes, Jr. Ella Mae leaves to cherish her memory a daughter Ella Jean Watkins (Michael) and a son Anthony “Tony” Nunnally (Edith) of Jackson, TN; two sisters Mary Mitchell of New York, NY, and Willett Rankins of Memphis, TN; three brothers Gene Powell (Ovester) of Jackson, TN; Sammy Powell of Houston, TX, and Anthony Hall of Murfreesboro, TN; ten grandchildren: Giovonya, Julia, Lakeshia, Brandon, Sr., Lance, Briana, Sparkle, Laprevia, Montavious, Sr., and Jay; six great grandchildren: Brandon, Jr., Kimora, Reagan, Harmony, Montavious, Jr., and Pauttez; two sisters-in-law Adjowa Hayes and Florine Mitchell; two brothers-in-law Andrew Dell Nunnally (Linda) and Isadore Nunnally; and a host of nieces, nephews, and cousins. Her special extended family included Mike and Mary Jane McWherter and their children Walker and Bess, a life-long friend Linda “Moochie” Ingram, and a very close and special friend Mr. Joe Hurt. Ella Mae, the cook, the beautician, and the comic was loved deeply by those who knew her. It is in all these areas of her life, and most of all in her role as a caring family member, friend, and loved one that she will be missed.

The family of Mrs. Ella Mae Nunnally created this Life Tributes page to make it easy to share your memories.

Send flowers to the Nunnally family.