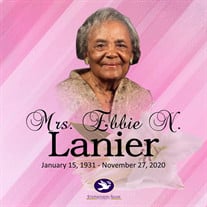 Mrs. Ebbie Neither Lanier was born on January 15, 1931, in (Chickasaw County) Houston, MS. She was the youngest daughter of eleven children born to Mr. Joseph Emmitt McKinney and Mrs. Julia M. Crawford McKinney. She passed away on Friday, November 27, 2020. She moved to Jackson, TN (Denmark) with her family when she was 13 years old. She often told the story of how she and her family had to sneak out of Mississippi because her parents feared for the lives of their sons due to racial unrest in the state. As a youth, she attended Golden Elementary School here in Denmark,TN. and then graduated from Merry High School. She then went on to attend Lane College, completing only one year. Not long after college, she met Earl Hines Lanier, Sr. She was 20 and he was 18 when they married in 1951. Their union of 68 years produced six children. She joined the Tabernacle of David The House of Israel in 1950, where she remained a proud member until her passing. She was a very dutiful church member, becoming one of the original Israel Missionaries, a church secretary, and participated as a member of the choir for many years as well. She was a very loving and devoted wife and mother. She stayed home and raised all six of her children until 1976, when she decided to join the workforce to help purchase their home on Chester St. where she remained until the end. She was mostly quiet in public, but was a strong and powerful influence in her household. She raised her children to be respectful and kind to each other and others and to reach for the stars! And she stuck by her husband to help him build and maintain a solid family unit. Mrs. Lanier died peacefully sleeping in her bed after coming home from a short stay in the hospital. She was preceded in death by her siblings; (brothers) Leroy, Samuel, Aaron, Bradford, Joe and James (her twin brother); (sisters) Etherine and Deltha May; her grandson, Marcus Lanier; and her husband, Earl Hines Lanier, Sr. She leaves behind to cherish her memory her children: Earl Hines Lanier, Jr., Cynthia Lanier, Rickey Michael Lanier, Harold Dewayne Lanier (Sikita), Sylvia Lanier, and Cecilia Denise Lanier-Birdine: siblings; Thomas McKinney (Earnestine), and Kurl McKinney (Ruth); and six grandchildren; Deidra and Darian Lanier (Michael), Adrian Lanier (Harold); Malik Lanier (Sylvia); and Nicholas and Neveah Birdine (Cecilia); and a host of other family and friends.

Mrs. Ebbie Neither Lanier was born on January 15, 1931, in (Chickasaw County) Houston, MS. She was the youngest daughter of eleven children born to Mr. Joseph Emmitt McKinney and Mrs. Julia M. Crawford McKinney. She passed away on Friday,... View Obituary & Service Information

The family of Mrs. Ebbie N. Lanier created this Life Tributes page to make it easy to share your memories.