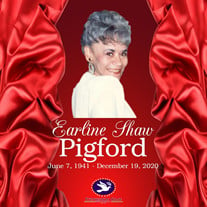 Earline Shaw was born June 7, 1941 in Stanton, TN to the late Earl and Pauline Bond Shaw. Earline’s vibrant life came to a halt on December 5, 2020 and God called her home on December 19, 2020. She was the youngest of 10 children. Her brothers Leslie, Raymond, Cloy and one sister Flossie all preceded her in death. She was baptized at an early age at Beech Grove Church of Christ in Brownsville, TN and later placed membership at the Carpenter Street and Southside congregations. Upon moving to Memphis as a teenager, she attended Booker T. Washington High School where she was a part of the Class of 1960. Throughout her life she furthered her education by studying banking at Draughon’s Business College and even took courses in cosmetology. She also spent time working at St. Joseph’s Hospital as a ward clerk. She loved children and worked at several day care facilities around Memphis. During a brief period, she worked with her brother at Shaw’s Catering and Restaurant in Decatur, Illinois. One of the greatest honors of her life was being the chief caretaker to her parents during their final years. Anyone that knew Earline, knew that she enjoyed country music, fashion, decorating, and travel. One of her daily pleasures was talking on the phone with her sisters and her friends. She was known as the “fun” aunt to her nieces and nephews because she believed that in life “you have to eat your dessert first”. Later in life she married her beloved Don Pigford who preceded her in death. Earline’s memory will be cherished by her only child Cecelia Renee Dennis. Two grandsons James Bradley Dennis (Ruby) and Lawrence Christopher Dennis. Two great grandchildren Arianna and August Dennis. Five siblings, Beatrice Fuller of Nashville, TN, Paralee Dunnings and Roger Shaw of Decatur, IL, Flora Lee of Germantown, TN, and Armanda Teamer Johnson of St. Charles, MO. Two special nephews, John Frank Fuller of Nashville, TN and Christopher Lee of Germantown, TN. A host of nieces, nephews, cousins and friends will forever hold a special place in their heart as she held them in hers.

The family of Mrs. Earline Shaw Pigford created this Life Tributes page to make it easy to share your memories.

Send flowers to the Pigford family.