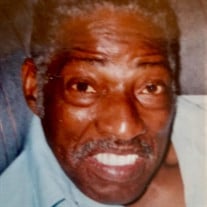 Mr. Earl Hines Lanier, Sr. was born February 16, 1933 in Jackson, TN. He was the son of the late Mr. Elbert Duckworth, Sr, and Ms. Lovie Mae Robinson. He was the youngest of Ms. Lovie Mae’s children. He passed away on Thursday, September 19, 2019. He attended North Jackson Elementary until he had to drop out in the 8th grade to get a job and help out his family. Mr. Lanier, then took a job at Chesterfield Grocery Store, where he worked for many years. He then went on to work in the grocery business throughout his life (over 70 years) retiring in 2011. Early in life, he met and married Ebbie Neither McKinney in 1951, at the age of 18. During their union together they had six children. He was the nephew of Farris Watson, who he referred to as “Uncle Fair,” and who established the The Tabernacle of David The House of Israel in 1944. He joined the church at a young age and continued on therein for the rest of his life, becoming a member, and remaining on the Trustee Board for over 40 years. Mr. Lanier was a great singer, having a most unique voice and was one of the original Israel Harmonizers. He sang with the Israel Harmonizers until he was no longer able due to health issues. He was was a jolly, happy man; always smiling, whistling, joking, and making faces. He was laid back and friendly, and was one of those people who you could say, “Never met a stranger.” He was a wonderful husband and father and a great provider. He spoiled his wife with kindness, and he raised his children with firm but loving arms. Family meant a lot to him, and he showed this through his work ethic and devotion. He was a tough, strong man until the end. He will truly be missed He was preceded in death by his siblings: Farris Lanier, Sr., (The former leader of Israel); Annie Mae Whitelaw, Elbert Duckworth and grandson: Marcus Lanier. He leaves to cherish his memory his wife: Ebbie Lanier: his children: Earl Hines Lanier, Jr., Cynthia Lanier, Rickey Michael Lanier, Harold Dewayne Lanier (Sikita), Sylvia Lanier, and Cecilia Denise Lanier-Birdine; siblings: Eula Binion of Nashville, TN, David Duckworth of Hawthorn, CA, Buford Duckworth and Elizabeth Duckworth both of Jackson, TN; six grandchildren : Diedra and Darian Lanier (Michael), Adrian Lanier (Harold), Malik Lanier (Sylvia), and Nicholas and Neveah Birdine (Cecilia) and a host of other relatives and friends

Mr. Earl Hines Lanier, Sr. was born February 16, 1933 in Jackson, TN. He was the son of the late Mr. Elbert Duckworth, Sr, and Ms. Lovie Mae Robinson. He was the youngest of Ms. Lovie Mae&#8217;s children. He passed away on Thursday, September... View Obituary & Service Information

The family of Mr. Earl H. Lanier Sr. created this Life Tributes page to make it easy to share your memories.