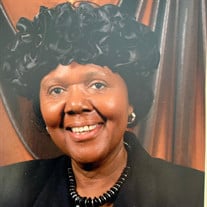 Doris Jean Kelly (lovingly known as Patty) was born September 14, 1938 in Jefferson City, Missouri. She was born to Alma Adele Johnson. In 1955, Doris attended Lincoln University in Jefferson City, Missouri. She decided to transfer to the University of Missouri at Columbia where she received her Bachelor of Science degree in Nursing. She worked at St. Mary’s Hospital in Jefferson City until she relocated to Milwaukee, WI where she served in many different nursing roles until her retirement in 1998. It was there she met the love of her life, Elder Sammie D Weddle. They were wed in 1963 at Mount Zion COGIC. They had four children Patrick, Kris, Michael and Sue Ann. Doris’ personal relationship with Christ began very early in her life. At the age of 9, she felt the unfailing love of Christ and accepted the Lord at an old fashioned tent revival. It was in Jefferson City ,Mo. where the late Elder Albert H. and Clemintine Nickens served as her Pastors and spiritual mentors. The impact of these individuals influenced her daily decision to serve God faithfully throughout her lifetime. Some of her leadership roles included State secretary to the late Mother Austin, Sunday school teacher, bible band leader and YPWW teacher. She was an example of a virtuous woman to her children,relatives, friends and coworkers. The legacy of Doris Jean Weddle will continue. Her legacy touched many including her late husband Sammie D, her four children Patrick (who preceded her in death), Kris Eison (Steve), Michael, and Sue Ann Mckinney (Kendrick); six grandchildren: Steven Eison, Charmaine Price (Jayson), Cody Eison, Amber Mckinney, Briana Mckinney, and Chantelle Mckinney; great grandkids Greyson and Lavender; brother Ed Johnson (Laticia); her late sister Theda Hannah ( late Marvin) and a host of loving nieces, nephews, cousins, and dear friends. Whether you remember her as a mother, grandmother or friend. Her sound advice and encouraging words have been seeds

The family of Mrs. Doris J Weddle created this Life Tributes page to make it easy to share your memories.

Send flowers to the Weddle family.