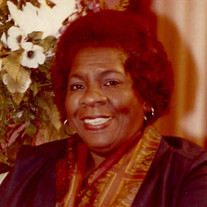 Doris Randolph Lee was born on June 25, 1932 in Jackson, Tennessee to the late Annie L. and Lee Randolph. She made her transition on Sunday, July 31, at 6:53 A.M. with her loving daughter and grandchildren by her side. Upon the passing of her biological father, Doris and her siblings were reared by a loving father, Eulus Holmes. Doris accepted Christ as her Lord and Savior at any early age and join Berean Baptist Church. Through the years, Doris volunteered in the Church to serve in many roles, including Hospitality Chairperson for Special Events. She enjoyed her association with the Lillie Scott Circle, a church based missionary group. The members looked forward to Doris hosting meetings in her home where they always raved about her being an exceptionally good cook and an outstanding hostess. Doris remained active in Berean Baptist Church until her failing health and relocation to Martin, TN. Doris always exhibited a passion for cooking. She developed a reputation among her peers as an outstanding cook and though her friends often called upon her for recipes, they were disappointed to learn that she never cooked by a recipe. Doris also believed that the display of food was just as important as its quality. She often say "food should not only taste good, but that it should look good as well." Doris was deeply committed to family life and devoted to her children. In fact, her life revolved around her children. As a single parent she held very high expectations. Doris was not only an inspiration to her children but she often got involved in the lives of her children's friends as well. As a career, Doris held several positions with the Jackson City Schools. She was a proud Teacher's Aide in the 1965 inaugural nationwide early childhood education program known as Project Head Start. After several years with the school system Doris was employed with the City Of Jackson Police Department, where she worked for nearly 30 years prior to retirement. She was preceded in death by two sisters; Lurline Randolph Gray and Margaret Randolph Sellars-Portis and one brother Udraineulus "Sonny" Holmes. Doris leaves to cherish her memory three daughters, Mrs. Sandra K. (Dennis) Harmon of Cape Coral, Florida; Cynthia A. Elliott of Martin,Tennessee; Jacqueline L. James of Washington, D.C. and John W. Lee III of Oak Park, Illinois. She will also be sorely missed by her seven grandchildren; Ryan, Myon, Ashlee, Devin, Dennis III, Eric and Derrick; six great-grandchildren; goddaughter, Lesia Reed; godson, Robert Charles, nieces, nephews, cousins, a host of friends and a very special couple; Melvin and Julia Gauthia.

Doris Randolph Lee was born on June 25, 1932 in Jackson, Tennessee to the late Annie L. and Lee Randolph. She made her transition on Sunday, July 31, at 6:53 A.M. with her loving daughter and grandchildren by her side. Upon the passing of... View Obituary & Service Information

The family of Mrs. Doris Randolph Lee created this Life Tributes page to make it easy to share your memories.

Send flowers to the Lee family.