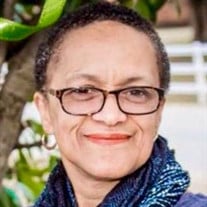 Debrah Lynn Marshall Scurlock was born Marcn 15, 1957 in Medon, Tennessee. She was the third child born to George Ivory Marshall and the Late Selma Salena Marshall. Debrah accepted Jesus Christ as her personal Savior early in life. From Marshall Chapel in Medon, Tennessee to the Church of God in Harvey, Illinois. Debrah was a faithful member of any church she a member of. She served in the choir, led praise and worship, and also cook. She traveled with her tambourine and was always ready to make a joyful noise unto the Lord. Debrah was a proud Class of 1975 graduate of West High in Jackson, Tennessee. After graduation Debrah married Danny Ray Singleton. To this union was born DeKesha and Diandrea Singleton. She later married Larry Scurlock in Portland, Oregon. To this Union was born Marsalena Scurlock. Larry preceded her in death. Debrah was always a hard worker. She was the proud owner of Rise and Shining Cleaning Service. Not only did she clean houses but she also cooked and ran errands for many clients as well. She enjoyed helping everyone. If you gave her a compliment on something that she had, many times she would give it to you. Giving was just a part of who she was. You could find her making cakes and pies to share with families near and far. Debrah Scurlock departed this earthly life September 22, 2016. She leaves to cherish her memories to her father George Marshall of Medon, TN; three daughters: DeKesha (Curtis) Tookes of Austell, GA; Diandrea Singleton of Powder Springs GA; and Marsalena Scurlock of Jackson, TN; Eight grandchildren: De’Janae, Brielle, Kiara, Cierra, Tamera, Devin, Kayla, and Tyren. One great grand daughter Madison. Five sisters Sandra Freeman of South Holland, IL; Wanda, Camilla, and Jessalyn all of Medon, TN; Trelia of Ripon, CA . Seven brothers: Dwight (Gloria) of Ripon, CA; Preston (Lori) of Corona, CA; Dexter of Jonesboro, GA; Eric (Angel) of Oakland CA; Jarvis (Sonia), Carmen (Kimberly) of Jackson, TN and Markedus of Medon TN. She also leaves behind in laws, aunts, uncles, nieces, nephews, cousins, and friends to cherish her memory. “WELL DONE THOU GOOD AND FAITHFUL SERVANT”

The family of Ms. Debrah Lynn Marshall Scurlock created this Life Tributes page to make it easy to share your memories.

Send flowers to the Scurlock family.