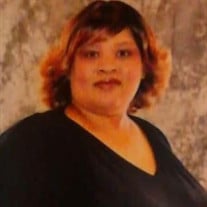 Deborah Ann Adams was born on January 10, 1966 in Englewood, New Jersey. She departed this life on Friday, August 16, 2019. The family moved to her mothers home state of Tennessee when she was younger. She attended Jackson Junior High and Jackson-Central-Merry High Schools. She performed in the chorus and was a member of the All West Tennessee Chorus. She attained two associates degrees in Business Management and Business Administration at the Jackson State Community College. Being raised in a Christian home, Deborah accepted Christ at an early age. She began attending services at the Greater Bethel A.M.E., Lord’s Tabernacle and Oak Grove Baptist Church. She found her final Christian home at God’s Deliverance, where she served the Lord until she was called home. She loved to cook and bring joy to the lives of those around her. Best known for her homemade rolls and punchbowl cakes. She put love into every meal she made. She was a friendly and feisty woman, who loved and welcomed all she has met. Despite her life struggles she always had a smile and love to give. She was a loving encouraging mother, sister, aunt, and friend. A surprised visit from all her children and grandchildren gave her the strength to fight. Her best friend and sister Frieda Boyle was with her every step of the way. She continued to fight with bravery and humor, she was called home surrounded by her family. She leaves to cherish her memory her children: Jimmy Hicks, Jeffery (Tia) Hicks and Jessica (Cortney Ragland) Dodson; father: David Adams; siblings: Stanley (Tracie) Adams, Ernest (Brianna) Love, David Adams, Sherry Adams, Beatrice Slobert and Frieda Boyle; grandchildren: Isaiah, Marius, David, Giabrielle, Amaiya, Ilana, Jason, Jeremiah, Vanessa, Selah and Charles. A host of other relatives and friends.

Deborah Ann Adams was born on January 10, 1966 in Englewood, New Jersey. She departed this life on Friday, August 16, 2019. The family moved to her mothers home state of Tennessee when she was younger. She attended Jackson Junior High and... View Obituary & Service Information

The family of Ms. Deborah Ann Adams created this Life Tributes page to make it easy to share your memories.

Send flowers to the Adams family.