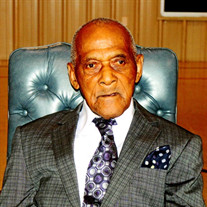 For I am persuaded that neither death nor life nor angels nor principalities nor powers nor things present nor things to come nor height nor depth nor any other creature shall be able to separate us from the love of God which is in Christ Jesus our Lord. Romans 8:38,39. Thursday evening, August 8, 2019 at 5:05 p.m., a great soul, Mr. Lue Wilbert Seats, age 96; went home to be with the Lord. He was comfortable, peaceful, well taken care of and merely went to sleep at the Lexington Manor Nursing Home in Lexington, Tennessee. In the fleeting of seconds his name was called, and his soul rose and made its journey Home to its Heavenly Maker. Lue Wilbert Seats was the second child born to the union of Mr. Ernest Seats and Mrs. Rebecca Douglas Seats of Carroll County Tennessee on February 19, 1923. Growing up, the family moved back to Henderson County and it was instilled into the offspring of Ernest and Rebecca, the importance of land ownership during an era in the rural South when the belief was that African Americans could only be share-croppers. He was educated in the Henderson County School System. He was a firm, nurturing father and demonstrated for his family, perseverance, faith, strength and a strong sense of dignity and pride. He had been a farmer of large acreages and nurtured and groomed farm animals in his earlier years. He also delighted in growing cotton, vegetables and flowers and was also able to influence, transform and transport generations of students touching countless lives as a Henderson County, Tennessee School bus driver for almost 50 years. He made certain that black children in particular had an opportunity to receive a high school education by purchasing his own school buses and supplying the gasoline. His objective was that a high school education would be accessible to all. He believed deeply, 2 Timothy 4:7-8, I have fought the good fight, I have finished the race, I have kept the faith. Now there is in store for me a crown of righteousness, which the Lord, the righteous Judge, will award to me on that day-and not only to me, but also to all who love his appearing. Preceding him in death was his beloved wife Elizabeth White Seats, the mother of his four children; his youngest daughter Omega, who slipped away as an infant, and his second daughter, Juanita Inez Seats Chunn; his second wife, Mae Nell Mylan Seats, his Father and Mother Ernest and Rebecca Seats; Siblings, Ernest, Jr., Floyd, Leon, Vertha Mae, Gracie and Irene, and his grandson, James Victor Smith. In his later years he developed a fondness for dogs and two became his cherished friend and companion, his last pet, the beloved “Jack “whose departure came all too soon. Left to mourn his passing but to cherish his life are: his elder daughter, Dr. Doris Barlow (Ret. Col. Dr. Joe Barlow), Hendersonville, TN; Ora L. Easley (Rev. Dr. William W. Easley, Jr.), Nashville, TN and Robert Lewis Seats, (special friend LaSalle Gauldin) Cedar Grove, TN; his grandchildren; Cynthia Renee Chunn Johnson (John Johnson), Nashville, TN, William W. Easley, III, (Sonja E. Tyler), Upper Marlboro, MD and a cadre of nieces, nephews, cousins and friends. He will be missed much by the family, but our connection to him transcends physical form and we are assured that we will meet him again. Today, we victoriously proclaim that because of Calvary, the price has already been paid and Lue Wilbert Seats will receive his will receive his crown.

For I am persuaded that neither death nor life nor angels nor principalities nor powers nor things present nor things to come nor height nor depth nor any other creature shall be able to separate us from the love of God which is in Christ Jesus... View Obituary & Service Information

The family of Deacon Lue Wilbert Seats created this Life Tributes page to make it easy to share your memories.

For I am persuaded that neither death nor life nor angels nor...

Send flowers to the Seats family.